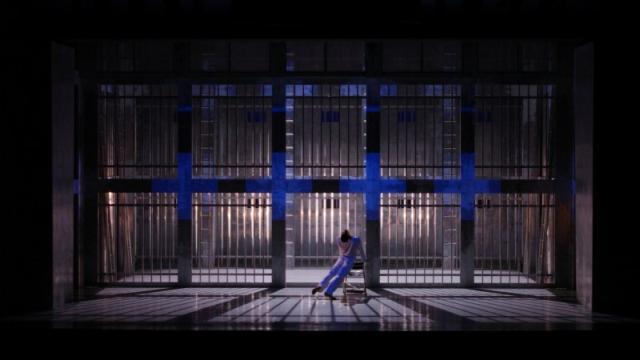 70s disco beats pound as uniformed men gyrate and strip a young man down to pants and gaffer tape. No, it's not a night at the Royal Vauxhall Tavern, it's the Coliseum's latest ballet, Midnight Express.

The true story of Billy Hayes was told in a book, then a late 70s film by Alan Parker. The ballet most closely resembles the film adaption which tells of a young American who tried to sneak drugs out of Turkey. He was caught, imprisoned and, we're told, tortured. It's this last aspect that Peter Schaufuss Ballet chooses to focus on – presumably because it's more dynamic, and therefore easier to show.

This is to the detriment of the story as a whole, which if you don't already know it, is incredibly hard to follow. You'd be forgiven for thinking that Olivia Newton John was running a mixed gender correctional facility. The brutal warden constantly struts around waving a rubber pipe – which is presumably mean to be threatening, but looks and sounds silly. Between the semi-erotic beatings and partial nudity, this becomes a voyeuristic show, rather than an exploration of justice.

Midnight Express was a controversial show before it even opened. Originally the role of Billy was to be played by superstar prancer Sergei Polunin, until he walked out on the production a week before opening – a trick he also performed last year for the Royal Ballet. Promising young Dane Johan Christensen stepped in and learned the role in three days. He holds it together well, and certainly deserves the big applause he gets, but it doesn't plunder emotional depth, as could be expected.

The ensemble doesn't hold up much better. It's wobbly, often out of time, and the attempts at a sort of street dance are devoid of swagger. And why are there so many women in this all male prison? The music is also pretty bad – a combo of 70s film soundtrack, and a "Best of the Classics" mix tape.

SPOILER ALERT: The real Billy Hayes was at the performance (so yes, he makes it out of the prison), and seems rather thrilled with the whole affair. Good for him, it's an interesting story, but not well-told on this occasion.