Dress Up And Get Down At The Barbican’s Salon Project 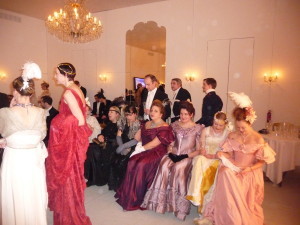 In theatre it’s only the cast who dress up in lavish costumes, right? Not when the piece being staged is The Salon Project, the brainchild of director Stewart Laing, which premiered in 2011 and now enjoys its London debut.

The inspiration was the nineteenth century Parisian salon where the well-to-do of the day would go to discuss the latest ideas and scientific developments in luxurious surroundings. Those events were, however, elitist since anyone not of a certain class would never have been admitted, and so Laing in recreating such an occasion democratises it by making it open to absolutely anyone.

All audience members are asked to submit their measurements in advance, and on the night everyone is ushered into a dressing area in the Barbican pit to be brushed up, made up and dressed up in a splendid period costume. Then throughout the evening the ‘guests’ mingle in a chandeliered room while being treated at intervals to lectures on, for example, current and historical understandings of sleep, given by today’s genuine leading authorities.

There are also a wealth of half-spontaneous, half-planned discussions led by cast members who mingle with, and are often indecipherable from, the guests. For example, one recurring talking point the night we went was the reasons why the women’s costumes were more varied than the men’s, and why female fashions have changed more since. The past is, in fact, always linked to the present and a tableau vivant sees the figures involved clutching laptops and mobile phones.

While The Salon Project may be enjoyed most by those who like dressing up and becoming involved, guests are not asked to adopt a character, and no-one is embarrassed by being thrust centre-stage. As such, it should prove suitable for anyone over the age of 16, and deserves a long life after its current run at the Barbican ends.

The Salon Project is part of the SPILL Festival of Performance. See what else is going on.

Londonist received a complimentary ticket from the Barbican press team.