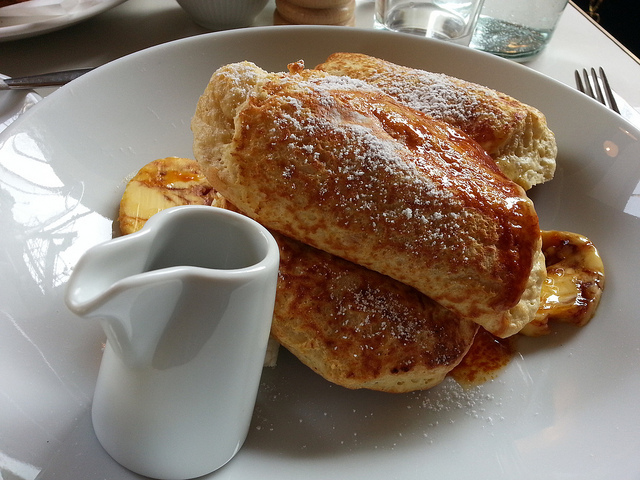 There aren't enough places doing pancakes in London. Not crepes; this isn't bloody Paris. We mean American-style pancakes, delicious mounds of buttermilk batter slathered in butter and maple syrup. And they're hard to find (no, McDonalds does not count).

Luckily, there's now one more place to add to the short list. Australian chef Bill Granger opened his first restaurant outside the Asia-Pacific last year in Notting Hill (but where the others are called Bill's, this goes under the name Granger & Co, presumably because of the rather similar, but not connected, chain). It's open all day but we'd heard good things about the pancakes, so we headed there for brunch.

OK: the pancakes aren't called pancakes. They're called hotcakes, but they're still basically pancakes. Fluffy, light, and yet substantial enough to have us gently burping afterwards, they encase a dollop of tangy ricotta to undercut the sugaryness of maple syrup and two rounds of honeycomb butter. Oh, honeycomb butter. We've been dreaming of that rich, smooth, sweet honeycomb butter. You also get a banana so you can pretend you're being healthy. You're not. You're eating top quality food, but these hotcakes are not your waistline's friend. Sod your waistline: when did it ever let you have fun?

We had even more fun with two thick slabs of toasted coconut bread, like coconut macaroons but moist, warm and, well, bready. Hot chocolate is made with Callebaut, liquid chocolate mixed with milk that you can also just lick off the spoon. Our dining companion pronounced the flat white to be fantastic and ordered another cup, but frankly by this point we'd stopped listening and were wondering if it's possible to marry a foodstuff.

If you prefer your breakfast less sweet, you can get a 'full Aussie' or try the scrambled eggs, which have the reputation of being the best in the world. We're also told that the sweetcorn, tomato, spinach and bacon fritters are to die for. But we're all about the pancakes.

Granger & Co is at 175 Westbourne Grove, W11. Disclaimer: We review anonymously and pay for all our meals/drinks. Brunch for two with drinks and service came to £40. And we'd like props for writing a whole review about hotcakes without making a 'going like' gag.