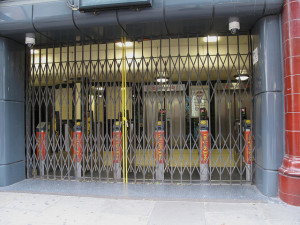 The Conservatives on the London Assembly have tube strikes in their sights again, asking the government to ban strikes or make it much harder to call one.

A new report, Struck Out, cites a poll of Londoners' opinions about tube strikes. They asked 285 people (a number Londonist's resident scientist described as unlikely to have any statistical significance) and came up with the following:

What we find rather amusing is that the Conservatives are in a fury about strike action being called on 'minority' ballots, but are calling for major changes to employment law based on less than 50% approval for each option (in a small survey). ANYWAY. Seeing how we're here, let's take a look at the other potential options on the table.

Taylor Law
Taylor Law was introduced in New York following a 12 day subway strike in 1966. It gave NYC's public sector employees union rights but removed the right to strike, replacing it with binding arbitration under a state agency. Strikes are still possible, but strikers forfeit an extra day's pay for each strike day. Still, New York Metro staff have walked out on two occasions since Taylor Law was introduced.

Binding Pendulum Arbitration
This option also removes the right to strike and replaces it with independent arbitration – but under this system, the arbiter cannot compromise and can only choose between the options presented by each side. The idea is that it encourages reasonableness (faced with a complete wage freeze, an arbiter is more likely to side with a union asking for a 2% rise than a 10% rise). It's a nice thought, but given where we are with the RMT we suspect it won't be that simple. We're also unsure about setting the parties against each other (if you've got to the point of arbitration, surely a do-or-die solution will only encourage combativeness?).

Complete Ban
What it says. Only the police and armed forces are not allowed to strike in the UK, and removing an entire group's right to strike because it's got annoying and costly (this latter is kind of the point) would set a dangerous precedent. Who next? Teachers? Health workers? The Tory report notes that 16% of those polled support this option without introducing any other means of redress, saying

Whilst the GLA Conservatives would like to see an alternative to strike action rather than banning it completely, in seeking a change to the status quo we should consider that a significant number of Londoners would go further than our proposal.

We refer you to our earlier comment about majorities.

50% + 1
This is a longstanding call from the GLA Tories, to have strike ballots changed so that 50% + 1 of all those polled need to vote in favour before a strike is called. That's an odd precedent to set when even no London election has ever broken 50% turnout.

The report ends with a recommendation to government to either outright ban strikes or move to binding pendulum arbitration. We don't doubt that a lot of Londoners are fed up with tube strikes, but is there a better way to deal with confrontation than more confrontation?

(Oh yeah, and staff on the Piccadilly line are currently being balloted for strike action over working conditions.)