Where To Celebrate St Patrick's Day In London 2013 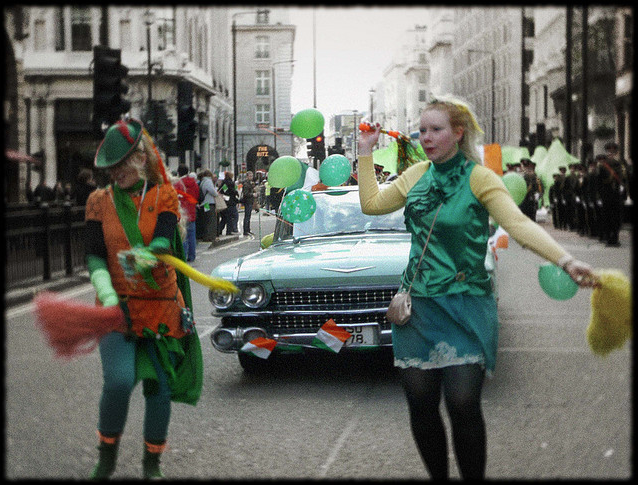 St Patrick's Day falls on its proper Sunday this year and there are some huge parties going on around town to mark it. It's an occasion where almost everyone finds some Irish heritage, memories or tastes to talk about and drinking Guinness or whisky is practically compulsory for a day. Whether you want to spend Paddy's cheering on the parade, wearing a silly hat, doing a jig or experiencing some authentic Irish culture with actual Irish people, there's a celebration — or a friendly Irish hostelry — in London for you.

Groups representing all the Irish counties will march from Green Park to Trafalgar Square in the St. Patrick's Day Parade alongside marching bands and floats. Expect a sea of green and a flurry of flags accompanied by live Irish music and dance — plus the odd stereo being pulled along on a wheely trolley for the less well-represented regions. An afternoon of Irish comedy follows in Trafalgar Square, with a food market and children's area. Parade starts midday, entertainment in the Square until 6pm.

Where better to be but London Irish Centre for an authentic St Patrick's Party? In fact, there's a whole weekend of celebrations, with a free family ceili and Big Irish Table Quiz on Friday night, then live music sessions all Saturday afternoon and evening, a chance to watch Ireland in the Six Nations Rugby, and an night of Irish film. Sunday is Paddy's proper, starting with St. Patrick’s Mass and full Irish breakfast, then a big mix of kids' crafts, live music sessions, a bacon and cabbage afternoon dinner dance, and the choice between a traditional Irish concert and céilí or a night of Irish spoken word and music. Check the website for times and tickets.

The Irish Cultural Centre in Hammersmith closes its doors to make way for a new building so expect the last gig on St. Patrick's Night to be a humdinger. Innovative, high-energy box player Liam O'Connor and friends provide live music for lots of jigging. Tickets £20/£17.50 concessions - expect it to be busy! From 7.30pm till late.

HMS Belfast marks its 75th anniversary on St. Patrick's Day when veterans will be aboard as will Irish food and entertainment. HMS Belfast is one of our top ten tourist attractions that don't suck so go and enjoy the craic with her. Normal admission price: adults £14.50, children free, open 10am-5pm.

Alternative Paddy's Day at the New Cross Inn raises funds for a local Party in the Park this summer. The gig will feature "the full range of Irish pop music: Enya. And the other one, who ripped up the Pope. Bald chap. And we think... that's it". There will be Irish Stew, Irish DJs, Irish shenanigans and Irish surprises from midday, with bands from 2pm-midnight. Admission £3.

On the eve of St. Patrick's Day enjoy a night of Irish Céili dancing in the beautiful 1930s Art Deco Borough Hall in Greenwich. A caller will keep your feet moving in the right direction, keeping up with the Fiddlestix Ceilidh Band. Takes place on Saturday 16 March, tickets £8/£6 concessions, call 020 8293 9741 to book, runs 8-10pm.

The Drunk Show aligns itself with the more alcoholic elements of St. Patrick's Day and gets comedians to perform their sets first sober, then drunk. Are they funnier drunk? Do they seem funnier because you're drunk? Find out. Takes place at the Sports Bar & Grill, Marylebone. Tickets £15, starts 8.30pm.