When Was Finsbury Square Full Of Standing Pricks? 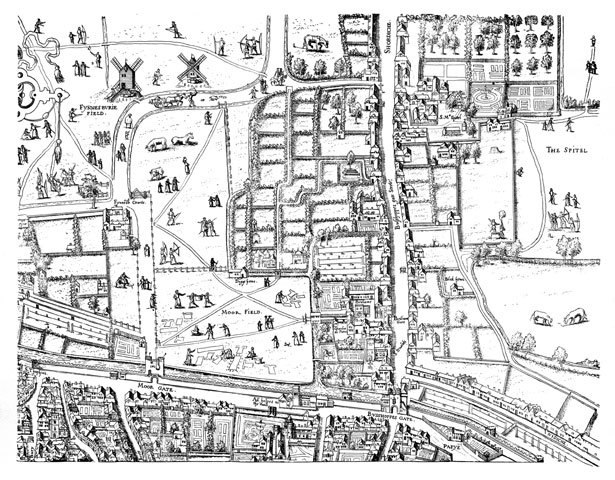 Finsbury Square and Spitalfields literally used to be nowt but fields and during Tudor times were used for archery practice. A law passed in 1514 made it compulsory for all men over seven years old to practice archery once a week (a law that still seems to be in force) and a map from 1560 depicts Finsbury Fields (as was) with several groups wandering around with bows and arrows.

Rather than Olympic-style shooting ranges that we think of today, in the second half of the 16th century archers preferred to roam around a space shooting either at random or a series of marks. Course markers were called 'standing pricks' (easy); a list of 200 markers still exists for Finsbury Fields, and makes the whole thing sound more like a round of golf than archery.

Horatio Busino, chaplain to the Venetian ambassador who we met a few weeks ago, wrote this description in 1617:

Well nigh throughout the year they have archery meetings in the fields near London. Some take aim at earthen mounds raised like a butt; others shoot at oaken marks, carved and painted, and surmounted by gilt pommels, precisely like so many human heads.

Health and safety also wasn't a big consideration, as the courses were used by ordinary pedestrians. Dame Alice Owens School, now in Potters Bar but originally from Islington, owes its existence to the shooting range at Finsbury. As a child, Dame Alice stopped to watch a cow being milked only to end up with an arrow through her hat. Thankful for her escape, she vowed to one day do something for others; after the death of her third husband, she had enough money to set up a school for 30 boys and an almshouse for poor widows.