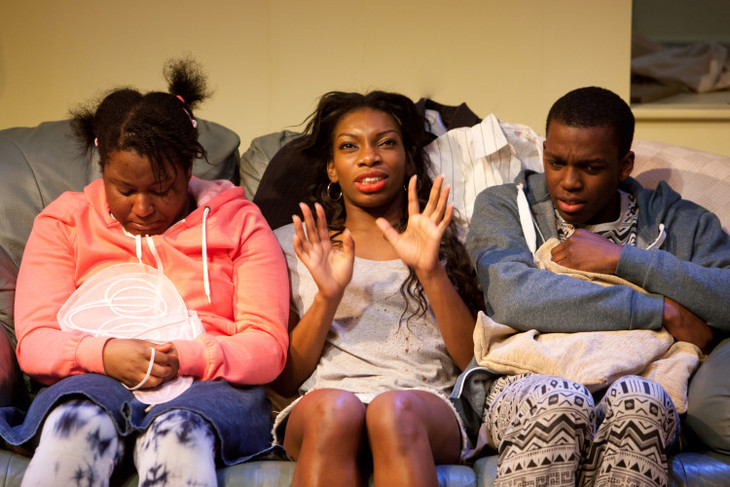 At the Bush Theatre, three siblings bicker in an under-furnished, Lewisham living room. Tiana is in charge, bossing the family and making wild plans; Tionne is sulky and always online; Tanika is worried about her school project and whether there are Strawberry Millions for tea. But why do they all hit the floor when there’s a knock on the front door? Why are they ordering syringes from Amazon, and experimenting on chickens? And why does Tionne spend all night in the bathroom?

Janice Okoh’s second play, Three Birds, comes to London from Edinburgh with a growing reputation and a stamp of approval in the form of the Bruntwood Prize for Playwriting. It could easily be based a true story – a couple of paragraphs in the South London Press – claustrophobic, twisted, horrifying and entirely believable.

Three teens have shut themselves away from the outside world, their mother is nowhere to be seen, and there is something wrong that no-one will discuss. The youngsters develop rituals involving strange jokes and stranger behaviour, bringing to mind the self-obsessed families created by Philip Ridley or Enda Walsh. The outside world insists on coming in anyway.  Dodgy geezer Dr Feelgood, hanging in through the window, is trying to collect on a debt; Tanika’s patronising primary school teacher, Ms Jenkins, comes over to find out why she’s not at school.

The dialogue is both surreal and very funny, featuring turkey basters, hand puppets, hand jobs, geezers dressed as geishas, and a raid on the Surrey Docks Farm. The play is full of gross physical comedy – very true to teen humour — which escalates out of control. However, Three Birds also packs a punch beyond the crazed, yet convincing, family dynamics. Okoh’s play is a piece of punishing social commentary that sneaks up on the audience without asking permission. The casual racism of the two outsiders goes unremarked, but as the story builds it becomes clear this is the tip of an iceberg. The world beyond – with Pinter-esque references to South Norwood and the West End — may not have the siblings’ best interests at heart. By the final scene, through expert shifts in tone, the audience is on the horns of a heartbreaking dilemma.

Performances are strong, with stand-out turns: from Michaela Coel (last seen at the Bush with her fantastic one-woman show, Chewing Gum Dreams) as Tiana, desparately trying to hold everyone together; and from the revelatory Susan Wokoma as pre-teen Tanika, hilariously blunt and physically awkward, but deeply affecting when her dreams fall apart. Jahvel Hall seethes in the corners of the set, silent but liable to boil over at any moment.

Three Birds is not perfect, with pacing issues that may resolve themselves as the run gets going, and a couple of scenes that would benefit from editing. However, it is essential new drama, both entertaining and disconcerting. It is the latest instalment in a rich London tradition of plays that turn the city upside down to show us what it is like on the underside, with no-one to protect you.