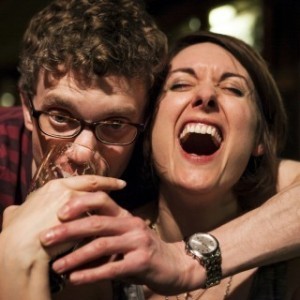 Richard and Katie meet when the hen and stag dos they’re on end up at the same bar. Pushed together by their overbearing friends, they get hammered and end up in bed together. Come morning, Katie is mortified, Richard smitten. Katie escapes as soon as possible, but when their best friends – loud, brash working-class Westy and equally loud, equally brash, fabulously monied CC – become an item, the next two years are a series of awkward meetings and hurt feelings, punctuated by the occasional failed seduction.

Written and performed by Richard March and Katie Bonna, the show won a Fringe First at last year’s Edinburgh Festival, and it isn’t hard to see why. This laugh-a-minute lark cleverly combines prose and poetry, rhythm and rhyme, and the dialogue is very clever and very honest – sometimes achingly, but most times hilariously so. The words (we almost want to say lyrics) do all the work: the set is bare and the talented Bonna and Marsh play all five characters themselves. There's sweet, geeky Richard, neurotic Katie, CC, Westy and – our favourite – Katie’s bumptious, Eton-educated, chutney-obsessed twerp of a banker boyfriend, Matt Priest. Yet they’re so wonderfully distinct, you look back and misremember a cast of five.

It’s only on until next Saturday, so get in there quick if you want to catch it. It’s worth it, we promise. You’ll come out with your heart warmed, beaming from ear to ear. Oh, as the title implies, it’s an, er, adult tale, so contact the box office (details below) if you want to bring anyone under the age of 16.