The 2013 Oxford And Cambridge Goat Race 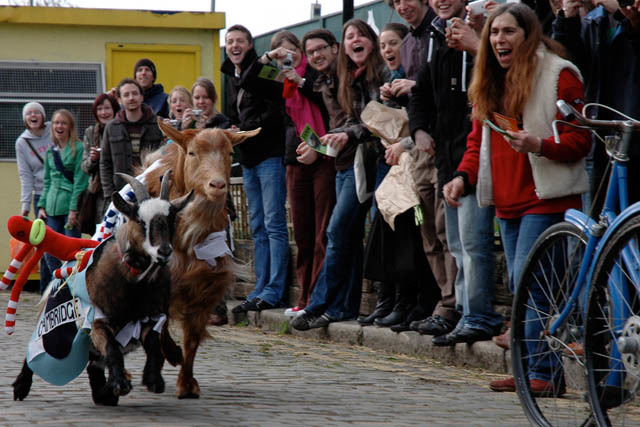 Booking has opened for this year's Oxford and Cambridge Goat Race, a popular annual tradition on the same day as the Boat Race. As ever, the caprine caper takes place at Spitalfields City Farm. Tickets are £5.50 (adults) and £1 (children). A tip from the farm, in case you're planning on placing a bet:

There have been rumours that Barney, the turbocharged pygmy goat who started Cambridge’s 4 year winning streak with his emphatic and unlikely win in 2009 is set to come out of retirement for this year’s race. Whilst we cannot announce the crews for this year’s race yet, we can confirm that we are in talks with Barney’s retirement home.

The event will include food and drink, live music and other entertainment, with all proceeds going to the running of the farm, a registered charity.

The Oxford and Cambridge Goat Race, 31 March 2013, doors 1pm, race 4pm. Follow them at @thegoatrace and on Facebook.