Penguin Publishes Set Of Books Inspired By Each Tube Line 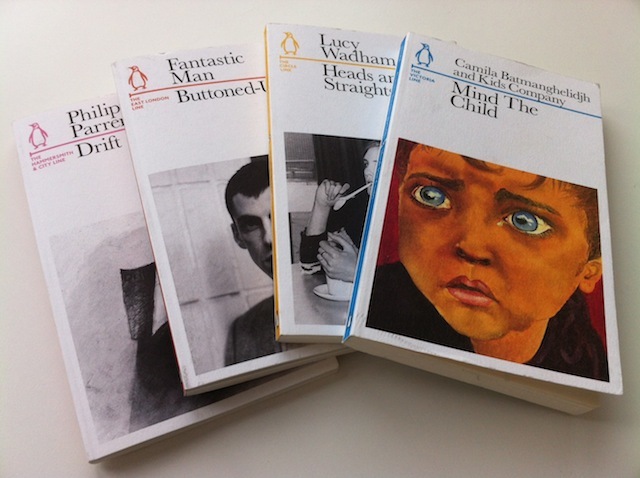 A rather attractive collection of short essays and stories was recently published by Penguin to mark London Underground's 150th anniversary year. Each one is coloured and themed to reflect one of the twelve Tube lines (with the conceit that the East London Line is still fair game, despite now being part of the Overground network).

We've so far got our hands on four of them. Like making a journey across town, it seems that the order you tackle the lines in makes a big difference to your experience, and you never know quite what to expect until you step inside. None of these books carries much by way of informative blurb, instead opting for a back-cover mini-interview, which offers the author's age, height, eye colour, first visit to London, self-rated Tube geekiness and other info...but little about the book itself. This is both charming and infuriating. On two occasions, we finished the book without really knowing what we'd just read.

We started with Heads and Straights by crime writer Lucy Wadham, assigned to the Circle Line. This autobiography describes the author's formative years in Chelsea, with her various relatives classified as 'heads' (experimental/dysfunctional) and 'straights' (sticking to societal norms). Dipping into the abridged memoirs of someone we'd never previously heard of was a surprisingly entertaining read, with insights into 1970s/80s subcultures and the pressures of growing up in the London of that time.

We moved on to Mind That Child, by Camila Batmanghelidjh and Kids Company, pinned to the Victoria Line because the charity has headquarters near Brixton. This presents many harrowing examples of child abuse in the capital, often written by the victims themselves. It's impossible to read some of these atrocious testimonies without being moved to tears — children living in their own excrement, beaten and raped by their supposed carers. Every Londoner should read this book for a glimpse into a side of the capital too many of us turn a blind eye towards, if we're aware of it at all.

The shift in mood on picking up the next book couldn't be greater. The editors of Fantastic Man magazine have put together a tribute to men who wear their shirts fully buttoned up, all the way to the top. Buttoned-Up could only be tied to the East London Line, picking up on this recurring fashion currently associated with places like Dalston and Shoreditch. It includes an interview with Neil Tennant and a readable account of Mod culture, shots of earnest young men in their buttoned-up finest, and some unexplained photos of alleyways.

The final volume we fingered, Drift by Philippe Parreno, describes itself as a psycho-geographic map of a subway line. In fact, it's a series of half-formed doodles and  black & white sketches of seemingly random objects and people: a padlock, some fungus in a book, a limbless child, a man being apprehended with a box on his head, some more fungus in a book. It's quite possibly the strangest thing Penguin has ever published. We don't want to judge it (we don't feel qualified), but we suspect it can only truly be understood and appreciated by riding the Hammersmith and City Line after necking a bottle of absinthe. Oddness on pogo-stilts.

So, that's where we're at. Four very, very different volumes, all loosely connected by the Tube network (which itself rarely features). The Kids Company book aside, we wouldn't advise buying any of them individually. But reading them as a disjointed series offers a perplexing and intellectually jarring (in a good way) glimpse into other Londons. Like the overall Tube network, this series is bigger than the sum of its the parts. The contrasts and transitions between books are as stirring as the books themselves. We'll certainly be grabbing the other eight pieces of this multidimensional literary jigsaw.

Penguin Lines are available now, individually priced at £4.99 or in a boxset of 12 for £60 (cheaper if you shop around). Other authors in the series include Danny Dorling, John Lanchester, William Leith, Richard Mabey, Paul Morley, John O'Farrell, Leanne Shapton and Peter York.