Clever Sketches From Totally Tom At Soho Theatre This Week 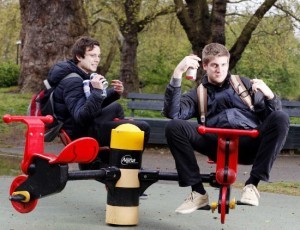 This comedy double act (Tom Palmer and Tom Stourton) serve up sketches at dizzying speed. The show they're bringing to the Soho Theatre this week is loosely based on how a pair of cons broke out of prison, but swerves off into so many other territories (American lawyers, Ryan Gosling and a Girl With the Dragon Tattoo skit that made us choke on our beer), it's less of a narrative arc and more a case of occasional recurring themes that build to a hilarious and clever finale.

Ah, the cleverness. Generally, sketch troupes settle into a matey familiarity with themselves and the audience, and part of the fun comes from the overall conviviality. Totally Tom aren't too bothered with that warmth malarky and their comedy is more cold and calculating. This just means they skewer their targets more effectively. That kind of shrewd, narrow-eyed intelligence could aim for something more hard-hitting than flameless poi and tabloid hacks – perhaps future shows could call on their Eton background (yes, it's true; but don't hold it against them) for some proper satire, but it's still relatively early days for the duo and silliness undercut by cynicism is still very pleasing.

There's also a lot of physical clowning about, with the pair very much committing to the process of looking like utter dicks in the name of comedy. They got nominated for Best Newcomer at Edinburgh in 2011 and although this isn't that show, they're definitely ones to watch.