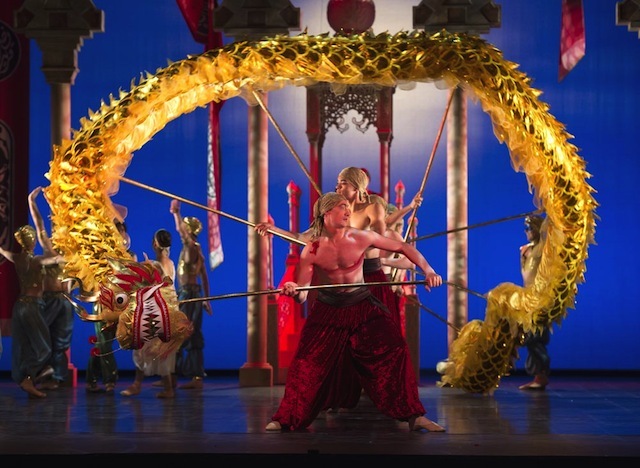 More action than Swan Lake, more suspense than The Nutcracker and more plot than The Sleeping Beauty. All of these things may be true of Aladdin, and yet no-one is seriously claiming that Birmingham Royal Ballet’s new creation is really on a par with those masterpieces.

But the ultimate strength of the work is that it never claims to be. It was designed, and certainly billed, as family fun, and it proves to be the best type in that it really is suitable for everyone. You don’t need to have little ones in tow either to go in the first place, or to enjoy the experience once you’re there.

Largely following the Arabian Nights story, while providing suitable embellishments, David Bintley’s new ballet goes at a cracking pace, and ensures that there is always something to catch the eye. Aladdin’s cave is adorned with illuminated stalactites, a staircase made from an upturned dragon carcass and jewels that come to life (although the latter is not an entirely original idea for ballet). The best of the Far East also meets Arab perfection as Chinese dragons dance amidst Moorish architecture, while, once seen, no-one could ever forget the flying carpet sequence.

The score feels a bit like Tchaikovsky meets E.T., which is hardly surprising since composer Carl Davis has written for both ballet and screen. This is not, however, a criticism, and it is this blend of styles that ensures that the quality music always remains highly accessible. The costumes, designed by Sue Blane of Rocky Horror Picture Show fame, are beautifully crafted, brilliantly contrasting black and white in the onyx outfits, and seeing sharply folded, shimmering tutus in the diamonds.

From among the strong cast, César Morales in the title role stands out, his movements and expressions convincingly conveying childlike mischief, wonder and obstinacy. He is matched by Nao Sakuma as the Princess, a picture of lightness and grace, and for all the grand spectacle that this Aladdin provides, there is little to steal the heart quite as much as the elegance and innovation that is shown in their pas de deuxs.