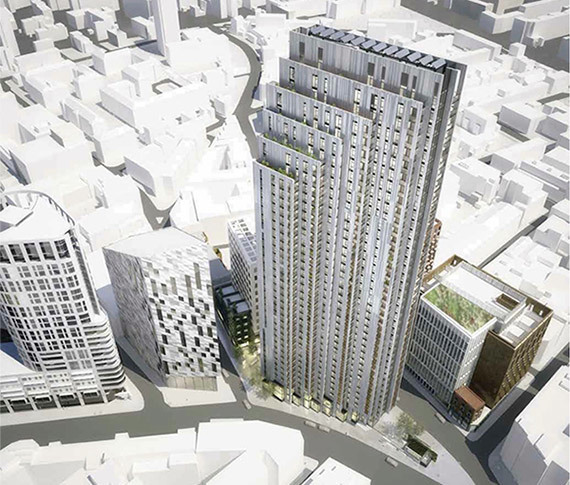 The stretch of City Road between Old Street roundabout and Angel is shaping up to be quite the cluster of towers in the next few years, as the demand for apartments with views of the world-famous Silicon Roundabout and the buttock-shaped Bezier building rockets. Construction Enquirer reports that approval has been granted for the tallest yet: a 152m residential skyscraper, designed by Make Architects.

The 39-storey tower comprises 302 flats. It is oriented toward the roundabout and its form has a certain elegance, although the same can't be said for the project's adjacent, 10-storey office block, a clumsy design barely visible in the render above.

The render above shows two of the smaller schemes that are transforming the south end of City Road. Eagle House, on the left, has been stalled for some time, with a baleful concrete skeleton left exposed to the elements after the developer went bust (although it may be restarted after being bought out last year). Between the two is a diamond-shaped boutique hotel, while further up the road is another residential tower: the Canaletto, so named because of its proximity to the Regent's Canal (obviously). On Twitter @the_max_doom described it as resembling "a load of paperclips round some fun size Mars bars". We couldn't possibly comment, although an increase in architectural language borrowing from chocolate bar motifs should be welcomed.

Aesthetically varied as these new skyscrapers are, they have little on this (sadly unrealised) Will Alsop scheme drawn up for the site some years. ago.