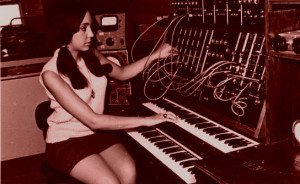 Running 6-17 March, the event wraps together performances, film screenings, talks and workshops at venues including The Macbeth in Hoxton, the Hackney Picturehouse, Rio Cinema in Dalston and Shoreditch club XOYO.

Prokofiev, whose club nights combine DJ sets with contemporary classical music (and previously covered on Londonist), wants to show the origins of electronic music through the "avant garde composers and mavericks" who experimented with new music forms long before electronic music became an established force. "It's amazing that despite the ubiquity of electronic music we know so little about its origins," he says.

The festival's headline event, on 14 March at XOYO, features a programme that includes music by 20th century composers such as Stockhausen, Messiaen and Varese alongside new music and a DJ set.

Other highlights include a workshop on 9 March with Wire magazine contributor John Richards, who will lead a session about learning to build synthesizers. Everyone involved will then perform at XOYO. The next day sees a film double bill at the Rio Cinema of two 50s classics notable for their use of electronic music: The Day The Earth Stood Still and Forbidden Planet.

Pioneers Of Electronic Music Festival runs from 6 to 17 March. See the Nonclassical website for the full line-up.