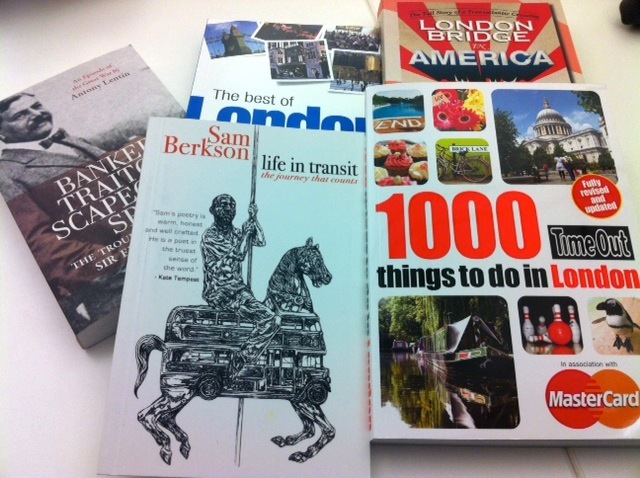 Ever since the previous London Bridge was shifted to Arizona in the 1960s, an irresistible myth has circulated that its purchaser thought he was getting the much more photogenic Tower Bridge. Travis Elborough's new book quashes this urban legend, while just, just leaving a fissure of doubt to keep quiz compilers happy. In truth, the story of how London Bridge came to span a man-made river in the Arizona desert is fascinating enough without invoking hoary anecdotes of pontine confusion. This account goes back a little further, giving a short history of the bridge and its medieval predecessor, before getting to the nitty-gritty of the improbable purchase and transplant, and the characters who made it happen.

Elborough has an astonishing aptitude for throwing out tangents to nowhere, meandering off though forgotten chapters of popular culture, then somehow corralling these flourishes back into a story about a bridge. A section on London's post-war redevelopment is preceded by five pages on the peculiar screen presence of James Mason. The chapter on the structure's sale features unlikely intrusions from Lonnie Donegan and Bernard Cribbins. Yet it all hangs together with the assurance of, say, a large stone bridge. Civil engineering has never been so much fun.

Fully revised and updated, boasts the cover of Time Out's re-released pick-and-mix of Londony ideas. We might question that 'fully'. A piece what we wrote for their magazine some seven years ago is still present, and no longer correct. All the main features remain the same as the 2007 edition, right down to the pagination (although, to credit, Ken Livingstone's job title has been updated). Even the Tube map's out of date. Still, we're being a little unfair. The guide remains best in class, in an increasingly crowded marketplace. For anyone new to London, or looking to get more out of it, there's plenty here. Just make sure you double-check that the details are up-to-date before taking up a tip.

Poetry is rarely an easy read, but Sam Berkson's collection of London traveller's tales whistles by like a locomotive under full steam. It's all about the journey rather than the destination, as Berkson probes those conversations, thoughts and occurrences that only happen when we share public transport. The Inspector's Discretion is a particularly fine rumination on fare dodging and petty outrage. Angst, suspicion and loneliness recur throughout this short but memorable collection. Iain Sommerville also deserves a mention for his startling, nightmarish illustrations, which capture this mood with almost supernatural potency.

As the Chairman of what became London Underground in the first decade of the 20th Century, Sir Edgar Speyer's name is remembered chiefly by transport buffs. He should figure more prominently in public consciousness. Without his philanthropy, we wouldn't have the Proms. He largely bankrolled the Whitechapel Art Gallery and both of Scott's Antarctic expeditions, and he served as President of Poplar Hospital and the Royal Society of Musicians. And then there was the small matter of rescuing the London underground following a period of financial turmoil. But there was a problem. Despite being a naturalised British citizen of 20 years, and one of the country's most generous benefactors, Sir Edgar was of German birth. When the First World War broke out, he found himself increasingly under suspicion, and was eventually stripped of his citizenship.

Antony Lentin's new book is not so much a biography of Speyer as a dissection of the social attitudes at a time of high national crisis. There seems little evidence that Speyer was a spy, or even sympathetic to Germany's cause. Yet he was ostracised by the Government, the Press and many of his former friends. Lentin presents the evidence, and leaves the reader to decide on Speyer's guilt or otherwise. It's a thoughtfully written account that makes the reader ponder how far governments today would go, if challenged with a crisis of similar magnitude.

The Best of London, by Londoners (Crimson Publishing)

Another guide offering 'all-time greats' and 'best-kept secrets' of London, this time crowdsourced from around 60 Londoners of various stripe, and compiled by Holly Ivins. It's an honest and straight-forward guide, with a few unusual sections ('Places you can see the Queen', 'Strangest pub names'...), but — other than the way it's compiled — nothing truly original jumps out. A fun, budget guide, though.