MATHS: Want to impress your friends by solving complex calculations instantly in your head? You should probably examine your priorities and motivations in life, but first, head to Barnard's Inn Hall in Holborn for a Gresham lecture about computation by humans and machines. Free, just turn up, 6pm

TECHNOLOGY: Find out how Britain is leading the way at reducing the cost of getting satellites into orbit, as Martin Sweeting and Maggie Philbin discuss the changing economics of space. The event takes place at the Royal Academy of Engineering, just off the Mall. £7.50, prebook, 6pm

SPACE: Michele Dougherty sells the virtues of Enceladus, a moon of Saturn with both organic molecules and plumes of water, at the Royal Society. Free, just turn up, 6.30pm

BAD PHARMA: Tickets for Ben Goldacre's talk about the shortcomings of big pharma at London School of Economics tonight have sold out, as they often do. However, there will be a returns queue outside the Peacock Theatre, should you wish to gamble on some unclaimed seats. Free, just turn up, 6.30pm 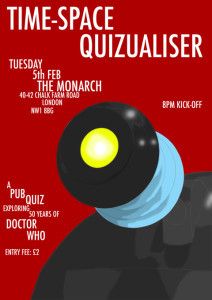 GRAVITY: It's the most mysterious of the four forces. Join Christian Boehmer at UCL for a lunchtime lecture looking at recent attempts to pin down the weighty issues with gravity. Free, just turn up, 1.15pm

ECONOMICS: Mark Schaffer, giving another Gresham talk at Barnard's Inn Hall, whizzes through 2 million years of human history from an economist's point of view. In particular, he examines why human living conditions changed very little for the vast majority of that time, then accelerated in the past few centuries. Free, just turn up, 6pm

RELIGION: The ever-provocative Steve Jones is at the Royal Institution discussing the ancient questions that both religion and science have grappled over the centuries, with a particular focus on his discipline, genetics. £10, prebook, 7pm

QUIZ: The Monarch in Camden is running a pub quiz entirely themed around Doctor Who. £2, just turn up, 8pm

ASTRONOMY: Carolin Crawford gives a Gresham talk at the Museum of London on recent developments in cosmology, including the discovery of dark energy. Free, just turn up, 1pm

PAIN: The Dana Centre has an evening devoted to the science of pain relief, for some reason themed around a fun fair. Try some fiery chili peppers, talk to people who've overcome chronic pain, and explore the possibility of using venom for nixing pain. Free, prebook, 7pm

SURGERY: How much can you be rebuilt?, asks this new temporary exhibition at the Science Museum, featuring a humanoid built from artificial body parts. Free, just turn up, till 11 March

HISTORY: UCL's lunchtime lecture ponders the role the Islamic world played in the development of science and medicine. Free, just turn up, 1.15pm

ART: An exhibition inspired by the interface between art and science runs at GV Art Gallery in Marylebone until 16 March. You can turn up anytime during the day between now and then, but tonight there's a private view for those who'd like to meet some of the people behind the show. Free, prebook, 6-9pm

BOOKS: This month's Salon event takes place at Foyles on Charing Cross Road and, appropriately, looks at the future of the book, as well as reviewing some of the big themes from last year's Salons. £10, prebook, 6.30pm

COMEDY: Stand Up For Darwin, hosted by Robin Ince and featuring a troupe of excellent geek comedians, runs at Conway Hall in Holborn. Funds raised go to the promotion of Darwinism, science and rational thinking in schools. £10, just turn up, 7pm

BRIGHT CLUB: This month, Bright Club teams up with Camden LGBT Forum as part of LGBT History Week. The speakers — a heady mix of academics and comedians — celebrates some of the contributions made by LGBT people to science, history and culture, as well as exploring the science of sexuality. £8, prebook, 7.30pm

Did we miss anything? Let us know in the comments or tip us off about future events by emailing matt@londonist.com