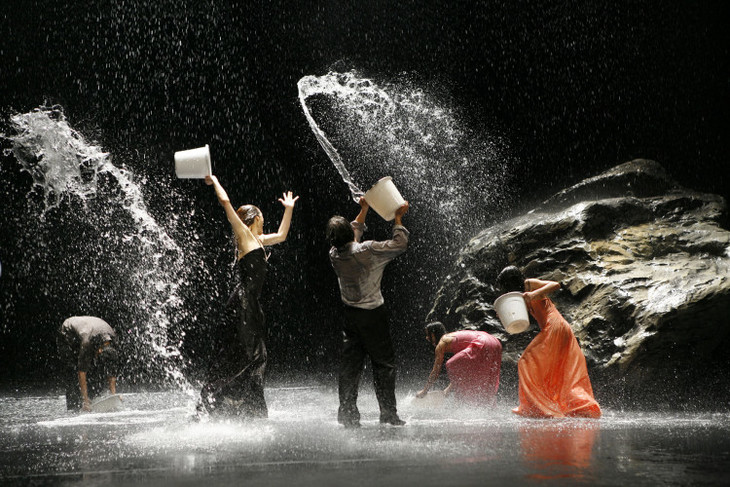 One of the undoubted highlights of last summer's Cultural Olympiad was Tanztheater Wuppertal's month-long World Cities residency at Sadler's Wells and the Barbican Centre. Long-term Pinaphiles and new viewers alike were indulged with ten astonishing works inspired by the international wanderings of the late Pina Bausch and her company, and such was the appetite for Bausch that Sadler's Wells has decided to host two shows from the company annually. Vollmond (Full Moon) is the second of this year's offerings.

Last week's Two Cigarettes In The Dark, from 1985, showed Bausch's penchant for exposing the cruelties of everyday life with bleak, absurdist humour. Vollmond (2006) has more in common with the later World Cities pieces; bizarre and apparently random things still take place on stage, but they're couched in a kind of ecstatic beauty rather than humiliation and degradation. The women - gorgeously clothed, as ever, by designer Marion Cito - appear sexually confident and far more in control of their destinies than their sisters in earlier works.  There are kisses, all-consuming embraces, and a masterclass in bra-management from dancer Azusa Seyama. The men appear desperate to please, hoping for a touch or kiss; the women strut among them like goddesses, occasionally pausing to sit on a proffered man-chair.

Like other later Bausch works, Vollmond is largely structured around solos for each of the cast. Silvia Farias Heredia whirls around the stage with luscious circling sweeps of the leg; the tiny Ditta Miranda Jasjfi adds rocking arms and buoyant leaps. Gradually, thanks to a concealed trough of water at the rear of the stage, the cast become wetter and wetter; the womens' long hair whips through the air and the men glide across the stage on dampened socks. When the stage finally erupts in a downpour to put Gene Kelly's to shame, the cast descend en mass to dance with primal joy, swimming offstage again in their fabulous frocks. There is comparatively little ensemble work in this piece; in as much as it's about anything, Vollmond seems to deal with the individual ways in which we experience life, love and taking the emotional plunge.

Bausch's works - whether the starker, emotionally-charged pieces of her youth or her more peaceful, uplifting later output - always have the capacity to transport their audiences to a strange, sometimes unsettling, often mesmerising place. Vollmond certainly takes its audience on a sensual journey; even when it's pouring with rain, Pinaland is a captivating place to visit.