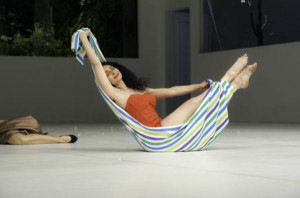 There's an equal stark spaciousness in both the set and temporality of Tanztheater Wuppertal's Two Cigarettes in The Dark. Bausch makes the audience work hard in this endurance piece; a series of slow moving vignettes about the monotony of life, which contains, of course, a good deal of monotony in its repetition and length.

It's not without moments of comedy however, and is salted with the absurd. A man stands atop a vertically-placed log, sipping high tea in a tux. The ladies, in their ballgowned finery, perform multiple handstands before taking turns on a slide the men have created by lifting a plank of wood. A man walks across the stage in wet pants and flippers, before entering the back of the stage which contains a jungle of plants, and once there, he yodels, muffled by the plastic window that reveals the jungle. Later we watch through the window as a couple, like animals in captivity, crawl about, sloth-like, before being shot unceremoniously at close range.

Bausch's ongoing themes of violence and gender trouble are here, but not as heavily as in other works; women are manipulated and humiliated, fling themselves at the walls, long hair flying. One holds an uncomfortable contortion in a dress that’s left insouciantly undone by the man who forced her to change into it. The women nevertheless have a certain strength of self-sufficiency, one of the most potent images is of a dancer relaxing in a hammock that she holds up herself, the material stretched taut over her arms and legs.

Dance movement is sparse; there’s a repeated motif to stirring stringed music that breaks in where various solo females begin a series of circling, reaching arm movements and staccato gestures about the face and neck. Its juxtaposition to the rest of the goings-on gives it the sense of an apparition, a beautiful narrowing-down into the solo mind of that dancer. Then both music and movement vanish abruptly and the starkness of the white set seems ever more overbearing.

Long, repetitive, by turns tense and barmy, yet infused with something vital, much like everyday life.

Two Cigarettes in the Dark is at Sadler's Wells, Rosebery Avenue EC1 until 25 February, tickets £15-£60. For more information see the Sadler's Wells website.