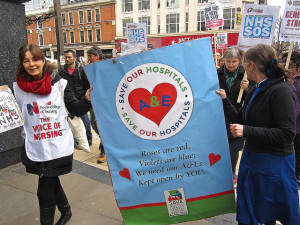 With all the inevitability of a newspaper whipping up a storm over a pregnant Duchess, it's confirmed that four A&Es in north west London will be downgraded.

Emergency care for 1.9m Londoners will be halved when Charing Cross, Hammersmith and Ealing hospitals have their A&Es turned into Urgent Care Centres, out of nine hospitals run by NHS North West London. Central Middlesex's A&E will not re-open and its intensive care unit will close. Ealing loses its ability to carry out emergency surgery and its maternity and obstetrics departments.

More detail has been released about what's going to happen to Charing Cross Hospital following Hammersmith and Fulham council's announcement that it was 'saved'. The buildings will be knocked down and the vast majority of the land sold off to developers; a replacement UCC run by GPs will take its place and 60 of the current 500 inpatient beds retained. It will become a specialist hospital without the facilities to perform emergency surgery or handle patients needing intensive care. What's more, funding for some revised services at Ealing and Charing Cross has yet to be identified.

For some reason it's the hospitals at the area's centre that are affected, leaving people around Ealing with much further to travel if they fall seriously ill (see map). Chelsea and Westminster Hospital is the only A&E in the area currently meeting its waiting time targets; the remaining A&Es will be expanded, but whether they'll be able to cope with the extra demand is anyone's guess. The rationale is that UCCs can treat about 70% of illnesses that patients go to A&E with – but that assumes people will assess themselves and make a decision about how ill they/their family member really is.

Ealing council isn't taking this lying down. They're backing local campaigners' plans to refer the proposals to the Secretary of State for Health – though, given Jeremy Hunt's decision over Lewisham Hospital, we wouldn't hold out too much hope.

Photo by Andy Worthington from the Londonist Flickr pool