TICKET ALERT: Tickets go on sale for Wilko Johnson's farewell concert, which takes place at Koko on 6 March. 9am (approx)

GIVE BLOOD: Become a donor by visiting either the Bishopsgate Institute or the West End Donor Centre (Margaret Street) today. Free, just turn up, times vary

ART: The Royal College of Art's Research Biennial Exhibition opens today, offering "an investigation on the  idea of disturbance, subversion and irritation in an art and design practice". Whether that means photos of somebody breaking in and trashing the place, or something more arty, we can't tell, but go and find out for yourself between now and 27 January. Free, just turn up, 10am-8.30pm (5.30pm on subsequent days)

PLUTOCRATS: Go to a talk about the 0.1% wealthiest people in the world at the LSE from Chrystia Freeland, author of Plutocrats: The Rise of the New Global Super Rich. Free, just turn up, 6.30pm

COMEDY: Chat Show Roulette is an improvised, er, chat show at the Hen and Chickens, with Justin Edwards as your host. Guests tonight are Matt Lucas, Cariad Lloyd, Mike Wozniak and Alex Lowe (alter ego of Barry from Watford) with James Sherwood as the house “band”. £8, prebook, 7.30pm

FREE GIG: Today's award for 'Free Gig Featuring Bands Whose Names Are Real Turnoffs But Who Might Actually Be Alright, We Don't Know' goes to the Old Blue Last's triple lineup of The Yawns, Old Men and The Brownstein. Walm-up act, Tedious As F*ck? Free, just turn up, 8pm

Random London Confusion of the Day 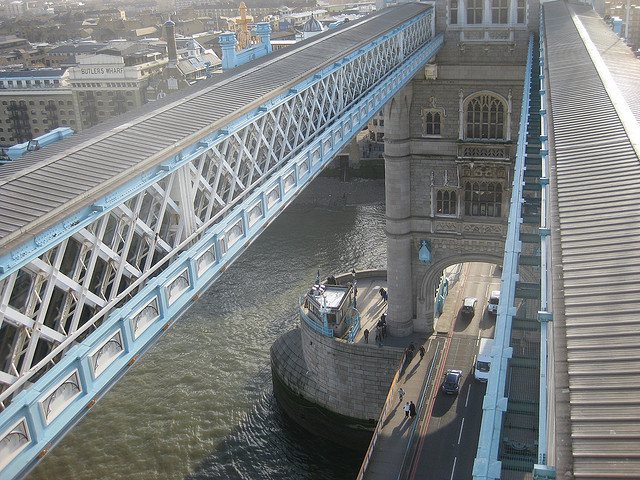 Do a Google image search for London Bridge and 28 of the top 50 results show Tower Bridge. The outcome isn't quite as dumb as you might suspect...many of those hits lead to pages about London bridges (in general), the London Bridge area, and some are even pages pointing out the difference between London Bridge and its more ornate neighbour. Not quite everyone has their facts straight, though. Meanwhile, someone's gone to great effort putting this cute London Bridge is Falling Down nursery rhyme video together, only to fall into the Tower Bridge trap (though, to be fair, when they rebuild it at the end of the video, it resembles the correct span...yes, we watched it all the way through, and sang along). And then there's Fergie from The Black Eyed Peas.

Charity Shout-out Of The Day
Head down to Procter Street in Holborn today, and any time over the next two weeks, where celebrities and normal folk will be standing in a shop front smashing walnuts with massive mallets. It's a somewhat oddball way of raising awareness for Prostate Cancer UK, a walnut being about the size of a typical prostate gland. The nut smashers will wield their weapons every time someone donates £5 to the cause...so click this link here, and give generously. Deaths from prostate cancer in the UK are almost as high as those from breast cancer in women, so it deserves some attention. Here's Bill Bailey to tell you more:

London Weather
The snow should have petered out by now, but the weather commentators all tell us that conditions remain 'treacherous'. For the sake of hilarity, we choose to believe they're employing the primary dictionary definition of 'treacherous', which is "Guilty of or involving betrayal or deception". Expect a platoon of melting snowmen to turn against their unwitting creators, marching into our homes and ripping out great hunks of the human flesh with their icicle teeth, as we squeal in the double pain of violent betrayal. In summary: Doctor Who Christmas Special.