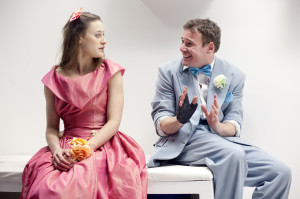 The Gate’s already tiny auditorium is split diagonally across the middle, and the audience faces itself across a gleaming white space, open on both sides. There are shelves with stacked clothes, a basin and two actors. Later there will be a wheelchair, a walking stick, a razor blade, several bloody bandages, and scars – lots of scars.

American writer Rajiv Joseph’s two-hander is receiving its European premiere at the Gate. Eight scenes shift forward and back in time, telling the story of Kayleen and Doug, whose train wreck, almost relationship is based on pain, as it becomes apparent they can only reach each other, and themselves, through self-inflicted injuries.

As extremely gawky teenagers they begin a cycle of pain that may be impossible to escape. Doug (“Just because I’m awesome at sports, doesn’t mean I’m stupid) has ridden his bike off a roof and “broken his face”. Kayleen (“I have a sensitive stomach”) throws up a lot. Later, they will vomit, rupture tendons, impale feet, break legs, cut themselves, get struck by lightning and end up in comas amongst other mishaps, which outlast the playground and become less and less accidental.

The two performers are riveting:  Mariah Gale, fresh from starring roles with the RSC and the Young Vic, is an exceptional actor. The quiet, desperate centre of the maelstrom, she is a woman in control but on the brink of losing it completely, squeezing our attention in a tight grip. Felix Scott (of Missing fame) plays the buffoon with feelings thinly masked, and fits a lot of physical comedy onto a small stage. Both make an effortless transition from immature teenagers to the brink of middle-age.

Although poised and full of intrigue, the play does not entirely sustain its promise. As scenes and scenarios repeat they become more comical but also too sentimental. Ambiguities are hunted down and ironed out, and emotional set-pieces grow stagey. The rapport between the performers, the real star of the show, is undermined by Joseph’s need to round off the plot.

However, director Justin Audibert delivers a seriously memorable production. Between scenes the actors change costumes on stage, and apply each other’s bandages and wound make-up. As they help each other they talk and laugh quietly, bringing the relationship alive in an impressively understated way. The music by Isobel Waller-Bridge builds a 80s, guitar-flecked mood.

Gruesome Playground Injuries is funny, sad and enjoyably gross. If the play is not a complete success, the production and performances certainly are. This is a great chance to see talented people up very close indeed, before they return to much larger stages.