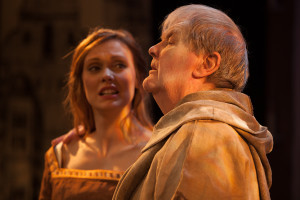 First and foremost, do not get too het up over whether, as the advertising suggests, this really is a lost Shakespeare play or not. Although Charles II’s librarian labelled it as coming from the hand of the Bard, director Phil Willmott, who specialises in reviving formerly lost or obscure works, seems as sure as anyone that it isn’t.

But that is hardly the point. Fair Em presents the opportunity to experience a play written by one of Shakespeare’s contemporaries (probably around 1590). By dissecting its imperfections as well as revelling in its still considerable strengths, we can have an enjoyable evening, and also think harder about the devices that Shakespeare himself employed to make his own plays so effective.

Fair Em is ultimately a romantic comedy, with love triangles (or rather pentangles) rubbing shoulders with identity swapping and a measure of almost slapstick humour. In the aftermath of the Norman Conquest of England, the stakes are high as William I himself is fooled into stealing the wrong woman away from Denmark. The deception runs further since, in the second plot, the Fair Em of the title is the daughter of a nobleman who has disguised himself as a miller to escape the ravaging Normans.

The play has its faults for there is no real explanation, or seed sewn, for why Em should finally favour one of the two Lords that woos her over the other. Similarly, it seems odd that Sir Thomas Goddard, who has spent the entire play hiding from William, should suddenly appear before him without fear, and so willing to pledge his allegiance. Against this, however, we have language that, although not crafted as skilfully as Shakespeare’s own, is largely constructed in the same style, and possesses its own significant merits.

Above all, this is an intelligent and entertaining work that Willmott’s production in the Union Theatre’s intimate space pitches just right. The cast deliver the lines well, and certain scenes are played with a dynamism that maximises upon their inherent humour. Music is also used to good effect with performers singing and playing a mixture of sixteenth century and modern tunes, and using these to emphasise the key moods and turns within scenes. From among the strong cast, the performances of Jack Taylor as William the Conqueror, Gordon Winter as the King of Denmark, Madeline Gould as Blanch and Robert Donald as Trotter stand out in particular.