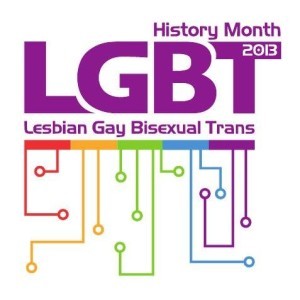 February is LGBT History Month, to mark and celebrate the lives and achievements of Lesbian, Gay, Bisexual and Trans people. LGBT people and issues weren't talked about openly until relatively recently, so there are lots of stories that remained shrouded in silence. The hope is that this month will allow those stories to be told to a wider audience.

Here's a snapshot of what's going in London, but you can see all events on the LGBT History Month website.

FILMS
1-3 February: Investigate a weekend of queer cinema at the V&A's Sackler Centre.

2 February: Catch artist and performer Wu Tsang's film Wilderness, a portrait of the Silver Platter, a historic bar on the eastside of Los Angeles, at The Tanks at Tate Modern. 8pm, £5.

17 February: Hither Green Cinema presents The Celluloid Closet, a documentary showing how Hollywood has both reflected and defined how we think about homosexuality. Plus a fair before the screening with local LGBT groups. From 5pm (free), film from 6.30pm, £5.

28 February: The Phoenix Artist's Club hosts a showing of the Channel 4 documentary Soul Survivor, about catholic priest Father Bernard Lynch, plus a Q&A with Bernard. 7.30pm.

BOOKS
8 February: Gay's the Word celebrates a collection of stories from older gays and lesbians, Gateway to Heaven. 7pm, £2.

18 February: Jonathan Kemp reads from and talks about his books London Triptych and Twentysix at Islington Museum. 1pm, free.

1 February-27 March: Loudest Whispers showcases LGBT artwork from more than 25 artists who are either professional or self-taught outsiders from Camden and Islington.

1 February-14 April: See Ajamu's photos of under-35 Black British-born LGBTQ people including, among others, artists, activists, poets and designers at the Guildhall Art Gallery. £5 / £3, free on Fridays.

24 February: Sadie Lee and David McAlmont talk about their favourite pieces in the Wallace Collection. 2.30pm, free but booking essential.

TALKS
4 February: Frederick the Great and Prince Henry of Prussia are the subject of the annual LGBT History Month lecture, at the Wallace Collection. 6pm, free but book in advance.

5 February: The 11th Stonewall lecture is about protecting gay refugees and takes place at the Law Society. 5.30pm, free but register in advance.

8 February: The brilliant David Morgan hosts as Bright Club takes its mix of comedians and academics to Bloomsbury Theatre. The theme is 'OUT'. 7.30pm, £8.

22 February: Find out how austerity and the rise of facism could affect the LGBTQ community. At Clapham Library, 7.30pm.

24 February: Take a ramble across Hampstead Heath with Camden LGBT Forum. Meet in Jack Straw's car park at 12pm. Free, but book ahead.