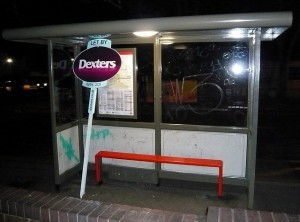 Housing and homelessness charity Shelter have revealed the areas of London where tenants are paying more than 50% of their income in rent.

In 23 of London’s 32 boroughs, private rents account for more than 50% of family incomes, while the overall median for the capital is 59% of income. Westminster tops the list of the most unaffordable boroughs, where the average rent is an eye-watering 91.4% of family income. Kensington & Chelsea come a close second at 90.7%. How does your borough perform? See the table below. 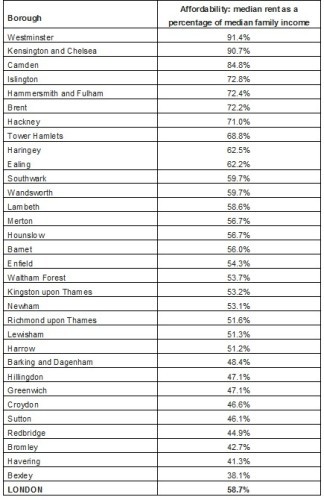 With rises in rent far outstripping pay increases, London has also become an eviction hotspot — where the risk of being booted out by your landlord is more than double that of the national average. In case you were wondering, Barking & Dagenham, Newham, Haringey, Hackney and Southwark are the top five on that particular list.

It's not just the high rents irking the capital's tenants, it's a perceived poor value for money. 49% say they feel they don't get what they're paying for while 33% fear being evicted. Last December, protesters gathered outside City Hall to demonstrate against high rents and letting agents' fees — another Shelter report last September highlighted excessive admin fees and double-charging for landlords and tenants by some agencies. It seems that few boroughs are attempting to clamp down on rogue landlords — Newham recently implemented a compulsory registration scheme — but housing groups say this doesn't go far enough.

“The news that renting in the capital is unaffordable isn’t a surprise to the families across London who are stuck in the rent trap, unable to save anything towards a home of their own because they’re paying out so much each month in rent.

“Rising rents, the constant threat of eviction, and hidden fees are all par for the course in London’s frantic rental market.

“With a quarter of Londoners now renting their homes, it’s vital that they take this opportunity to make their voices heard. Boris Johnson has shown he’s listening to what renters have to say. This is our chance to re-design renting for a city which deserves a better deal.”

Photo by Matthew Gidley in the Londonist Flickr pool.