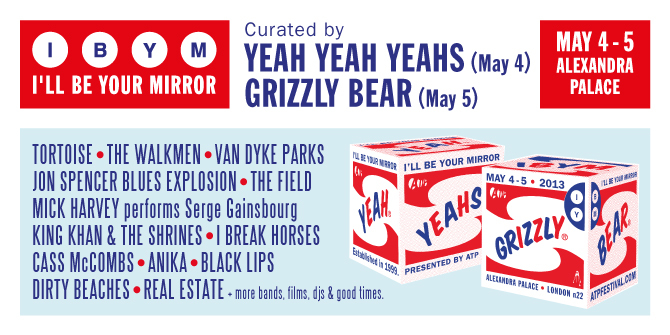 American cult icons Yeah Yeah Yeahs and Grizzly Bear have been announced as the headliners and curators of this year’s I’ll be Your Mirror festival at Alexandra Palace.

Both bands are playing exclusive shows for London’s most exciting festival, which returns to the cavernous Great Hall for the third year over 4-5 May.

I’ll Be Your Mirror is undoubtedly the coolest festival on the planet. Not only is Ally Pally London’s best big venue (so says me – DN), but the All Tomorrows Parties-organised line-ups are always phenomenal with PJ Harvey, Portishead, Mogwai and Slayer having made previous appearances.

For their first London show in four years, Yeah Yeah Yeah have brought along Jon Spencer Blues Explosion, Dirty Beaches and Nick Cave collaborator Mick Harvey on 4 May, with more to be added.

Tickets go on sale Thursday 9am, so once again it’s time to pull a sickie and start hammering at the refresh button on the ticket site.

Plus many more to be announced

ATP presents I’ll Be Your Mirror curated by Yeah Yeah Yeahs and Grizzly Bear @ Alexandra Palace, 4-5 May. Tickets on sale Thursday 31 January at 9am priced at £59 for Day Tickets or £110 for a 2 Day Pass though www.ATPFestival.com