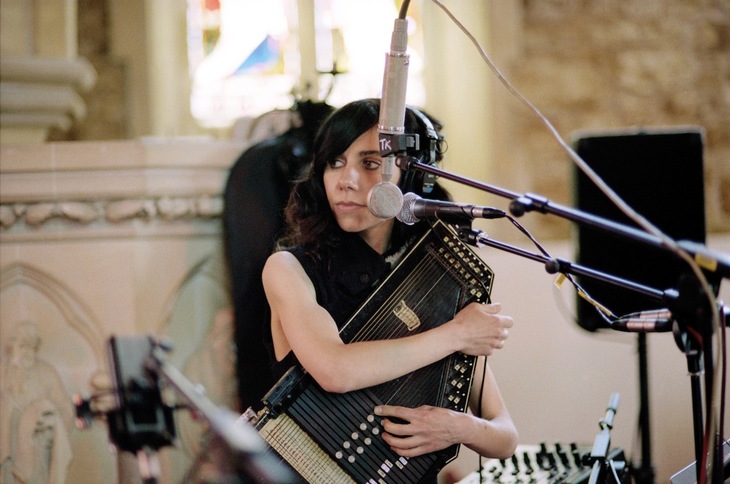 It is difficult to pinpoint exactly when PJ Harvey became a national treasure. The lazy suggestion is that it was her Mercury Prize win in 2001 (for 'Stories From The City Stories From The Sea'), which elevated her to this status. It can, however, rightly be argued that Harvey's positioning as a vital, integral, part of the quintessentially English musical landscape was, in fact, well established by the mid-1990s, when 'To Bring You My Love' (her first record after disassembling the original PJ Harvey trio) aligned both planets of critical acclaim and commercial success for the Bridport-born musician. With latest record, 'Let England Shake', storming into the top 10 earlier this month, it is clear that Harvey's popularity is far from waning.

Performing to a packed house at Troxy on Sunday night (the first of two at this capacious venue), Polly Harvey, wearing a long black gown and a head-dress resembling a nestful of black crows, was joined on stage by John Parish, Jean-Marc Butty and Mick Harvey. Together they brought 'Let England Shake' to life in its entirety (albeit in a slightly shuffled order), alongside a selection of older offerings from Harvey's extensive back-catalogue. Autoharp in hand (or, rather, on shoulder), Harvey opened this generous (length-wise) show with the new album's title-track, impressively bettering the song's already affecting studio-recorded counterpart in the live setting. Paying homage to the melody from the Four Lads' 'Istanbul, Not Constantinople', 'Let England Shake' saw Harvey mourning the end of England's so-called dancing days.

Other songs which stood out in their translation from album-recording to live performance included 'This Glorious Land' (with its haunting refrain of "What is the glorious fruit of our land?... fruit is deformed children"), the evocative 'Written On The Forehead' and the album's sonically subtle yet lyrically hard-hitting first single, 'The Words That Maketh Murder'. Of the older tracks performed, some worked better than others, with 'Angelene', The Sky Lit Up' and ' C'mon Billy' sounding as magnificent as they ever have, while 'Meet Ze Monsta' and 'Big Exit' appearing to have lost something of their vitality (the latter starting off promisingly but ending up a bit empty-sounding by chorus-time). Conversely, a couple of pickings from 2007's 'White Chalk' album, including the encore's 'Silence', hit the mark beautifully.

All in all, this was a tremendous show. Here's hoping 2011 sees a full national tour by this indubitable national treasure.