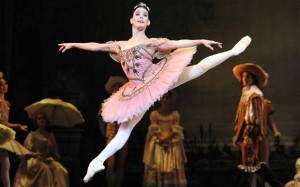 English National Ballet begins 2013 in style with a Tchaikovsky masterpiece, interpreted by one of the truly great choreographers of the twentieth century, Kenneth MacMillan. MacMillan’s production does not take any radical stance on the work, but rather prevails by virtue of the sheer quality of dancing it demands, the opportunities it provides for performers both to demonstrate technique and explore character, and the sumptuous overall atmosphere that it generates, thanks also to Nicholas Georgiadis’ gorgeous costume designs.

Amid an excellent line-up, the stand-out performance comes from Tamara Rojo, the former Royal Ballet Principal Dancer and ENB’s new Artistic Director, as Princess Aurora. Besides her superlative technique, such surety yet refinement underlie every single movement that she can convey a myriad of emotions in just a bend of the knee or curve of the arm, the pulses of energy positively cascading through her body. She also proves happy to take tremendous risks in the famous Rose Adagio, and the fact that they pay off so handsomely only makes her performance all the more thrilling.

As Prince Désiré, Vadim Muntagirov, still only 22 but already a Lead Principal Dancer for ENB, grows over the evening. His cleanness, agility and speed through the air have always been strong, but he is also developing into an intriguing psychological dancer, applying a high degree of stylistic integrity to his wondrous movements. Muntagirov and Rojo’s Act Three pas de deux impresses both in the execution of the iconic poses, and the smooth manner in which the transitions from one to the other are managed. As Princess Aurora, Daria Klimentová, herself a Lead Principal for ENB, delivers a highly spiritual performance, while James Streeter revels in the predominantly character role of the evil Carabosse.

These central performances are supported by those of the other Fairies in Act One. There is delicacy and fluidity in Begoña Cao’s movements, an expressive exploration of space from Laurretta Summerscales, and excellent responses to the mischievous, fluttering or exuberant rhythms from Adela Ramirez, Shiori Kase and Nancy Osbaldeston. The additional performances of Anjuli Hudson, Juan Rodríguez, Yonah Acosta and Max Westwell as the fairy-tale characters in Act Three also bring their own brand of excitement to an evening that is ultimately characterised by an exquisite attention to detail in every movement and gesture.

Until 19 January at the London Coliseum, Saint Martin's Lane, Charing Cross, WC2N 4ES with start times of 14.30 and 19.30. Casts vary over the run. For further details and tickets (£10-£67) visit the English National Ballet website.

Londonist received a complimentary ticket and programme from the ENB press team.