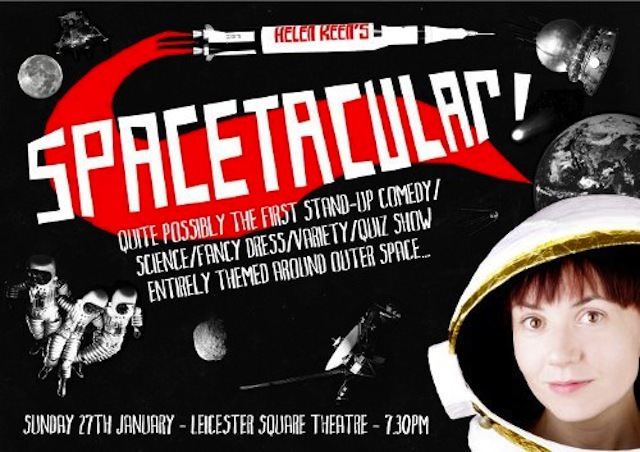 Tickets are selling well for our first ever West End Show, Helen Keen's Spacetacular! at Leicester Square Theatre on 27 January. The show looks beyond our city to the stars, combining comedy, space science and general fun and games, all themed around outer space.

Hosted by Helen Keen, star of Radio 4's It Is Rocket Science, you can expect plenty of astronomical wonders, sci-fi soundtracks, and an inordinate amount of tin foil. We've lined up an excellent bill, including scientists, comedians and TV presenters. We'll also run one of the largest 'pub quizzes' of all time, to test your knowledge of the cosmos. Come along in fancy dress (though it's not mandatory) and bring any space toys or souvenirs for the audience show-and-tell.

Londonist readers can get 25% off the ticket price (£7.50 instead of £10) throughout December by using the promotional code 'Londonist' on the booking page.

Helen Keen's Spacetacular! is co-organised by Londonist and supported by the UK Space Agency. Buy tickets here, and follow Spacetacular! on Facebook.