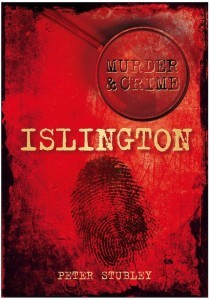 A new book from The History Press documents some of the darker tales from the Borough of Islington's past. Its pages jostle with dashing highwaymen, cudgel-wielding thugs, house-breakers and thief-takers, Italian crime gangs and a certain Holloway doctor of foul repute.

Author Peter Stubley selects 13 tales of yore and gore. The book begins with 17th Century robber Charles Duval, after whom Hornsey Road was briefly named. It ends with the 1937 case of Frederick George Murphy, who murdered a prostitute off Islington Green. In between, we learn more about cases such as Dr Crippen, the robbing of Grimaldi the clown, the man who drowned three brides in the bath, and the heartbreaking story of a woman and her four children, murdered by their father in Pentonville.

Stubley, a recent guest on Londonist Out Loud, is jugular-deep in the archives of London crime. This latest book comes just a few months after his last, which recounted 50 other London murders in the year of the Ripper. He's also the founding editor of MurderMap, a site that seeks to plot (graphically if not criminally) every documented murder in London's history, including recent crimes.

Reading through Stubley's new book, it's clear that Islington has suffered its unfair share of violence. The 13 cases presented here are just a baker's dozen from a brutal catalog, and many further examples could have been drawn upon. The unfortunate life and death of musician Joe Meek — who shot dead his landlady on Holloway Road before taking his own life — is a prominent omission, for example. Nor are any female malefactors chronicled.

Still, it's a well researched and illustrated selection from the borough's more harrowing  archives, and a highly readable introduction for anyone who wants to see beyond the stuccoed porches and elegant terraces of Islington.

Murder & Crime in Islington by Peter Stubley is out now from The History Press. Buy here.