Things to do for a fiver or less. Happy new year! 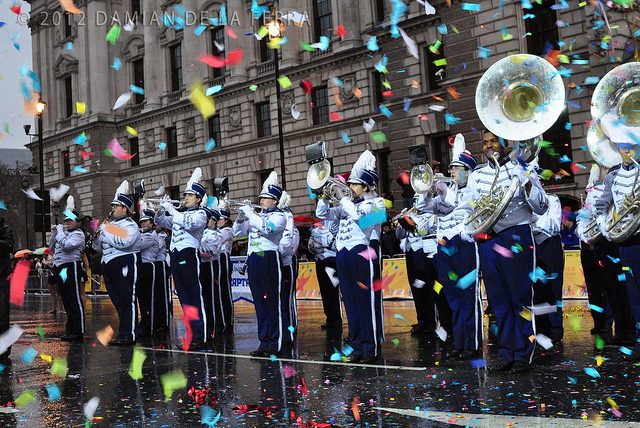 Oh, and don't forget to renew your Travelcard before new fares kick in on 2 January.

Monday 31 December: If you're heading into town for the New Year's Eve fireworks, be prepared. Plan ahead - use the official website to find the best place to stand and think about how you'll get home. Check the toilet map too, could be handy. There'll be music from 10pm, leading up to the bongs at midnight and the ten minute or so firework display. Don't forget to revise the words to Auld Lang Syne.

Tuesday 1 January: The New Year's Day Parade, or LNYDP as the posters are calling it, starts at 11.45am on Piccadilly and ends around 3pm on Parliament Street.

19 Princelet Street, the Museum of Immigration, will be open to the public on New Year's Day. This a rare opportunity to explore this tiny, historic house, "a 1719 Huguenot merchant's home whose architecture and touching art installations tell the stories of people arriving as strangers and becoming citizens". Entry is free but donations are welcome. Wrap up warm! Open 2-4pm. Also open on Saturday 5 January.

Thursday 3 January: Get a tour of the Guildhall from City of London Guide, Tina Baxter, between 11am-1pm. Free but please register.

Friday 4 January: London Short Film Festival launches at the ICA. It's £10/£8/£7 if you want to watch the new funny shorts in the cinema but there's a free entry party in the bar from 6pm if you just wish to mingle with filmy types and watch a "human suspension".

Saturday 5 January: Is it time to find a Parkrun? There's one at Ally Pally at 9am.

Not much else going on specifically today so it's a great opportunity to consult our London For Free map and find yourself something frugal to do.

Sunday 6 January: Wassailing takes place in the Memorial Orchard at East Greenwich Pleasaunce, with tree cosseting from 11.30 and story telling and mulled cider till 3pm. Free to attend.

The Geffrye Museum burns the holly and the ivy, leads carol singing and tells stories about Epiphany to say Farewell to Christmas in the garden between 3.30-5pm. Free admission.

What did we miss? Let us know in the comments.