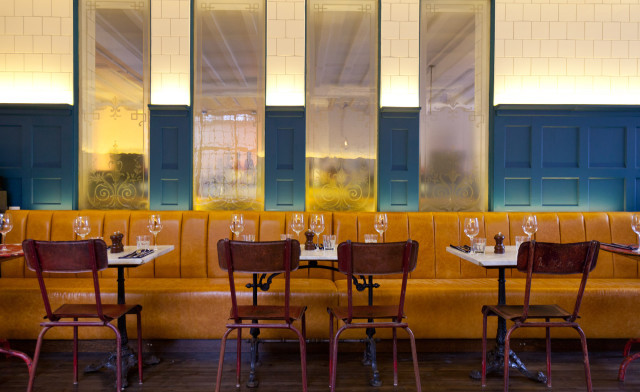 Kensal Green hasn’t typically been known for having much of a food scene, but that may all be changing. The one venue which has really made a name for itself in the area has recently gained a companion, with this newly named and revamped restaurant arriving in what was formerly The Regent just around the corner from the popular Paradise gastropub.

Highly regarded industry upcomer Jesse Dunford Wood is in charge of the kitchen, and If his turnaround of the now accolade-drenched Mall Tavern in Notting Hill is anything to go by, it’s in safe hands. Indeed there’s some pretty impressive dishes on the eclectic menu which gives a respectful nod to traditional pub grub before running playfully amok.

A wild mushroom pâté starter eschews the likes of bread as an accompaniment in favour of twirly puff-pastry dippers, and boasts enough umami and earthy oomph to make you forget it’s actually vegetarian. But don’t worry, choose the cow pie for mains and your flesh levels will stay carnivorously high. Anointed with bone marrow and crowned with a beef suet pastry crust, it’s no ordinary beef and ale pie and certainly not for the faint-hearted. It may just be the way to ours, though.

Our stately stacked cheeseburger looked so impressive that we spotted it leaving the pass before it even got within a sniff of our table. A subtle dose of mustard lurking in the vibrant pink meat adds complexity, and the bloody patty is packed with bovine flavour, though we wouldn’t be surprised if one or two customers found the rawer-side-of-rare meat a bit too much to manage.

If a customer has ever declined the homemade Wagon Wheel for pudding, they’re better people than we are. It arrives deconstructed with the kitchen’s own marshmallow ready to be sandwiched between the biscuit bases and attacked by our waiter’s slightly disturbingly large blow-torch. Complete with menacing grin he does the deed and we’re left with a wonderfully debauched and comforting dessert alongside a little disappointment that there was no jam involved, and a feeling of satisfaction at having experienced our first merging of dining with The Shining.

It may be an action-packed thriller which isn’t suitable for those of a nervous disposition, but if clever British food, well sourced ingredients, an extensive beer list and an open fire sound like your kind of thing, then it’s well worth a rummage in the Parlour. With this market making waves in the food world as well, a visit to this neck of the woods is becoming well worth your time on the Bakerloo line.

Parlour is at 5 Regent Street (not that one), NW10 5LG (see map). Visit their website here.