Dance Review: The Wind In The Willows @ Linbury Studio Theatre 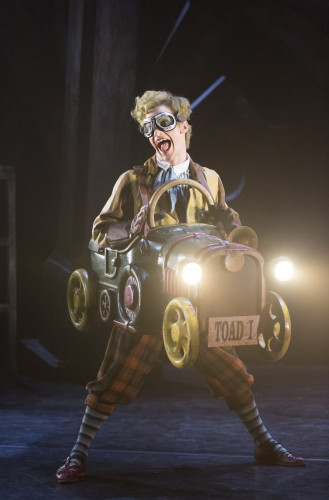 Will Tuckett, choreographer and last minute replacement narrator at yesterday evening's performance, steps onto the cluttered attic-style stage and reads from a worn and dusty old book. "Forget the world outside," he encourages the audience, asking if we will follow the story he tells, to which a chorus of enthusiastic children reply 'yes'.

Suddenly the stage is transformed into a riverbank, with Mole tumbling out from a rolled-up carpet and a length of blue fabric cascading like water from the attic's large wardrobe. And so begins the delightful dance show that is Tuckett's The Wind in the Willows – a favourite at the Royal Opera House's Linbury Studio Theatre that celebrates its tenth anniversary this year.

Based on the classic children's book of the same name by Kenneth Grahame, we are invited into the world of Toad as he discovers motor cars (pictured) and inadvertently proceeds to terrorise other small animals of the Edwardian gentry. The action is even continued into the interval; we nearly dropped our glass of wine when Toad came speeding past, swiftly followed by two loudly-whistling policemen.

It's hard to characterise the style of this production, with tap, contemporary and ballet dance movements and even singing thrown in. But the style matters not, because the whole show is so utterly enchanting. It's designed for youngsters but there is plenty for adults too, with a beautiful score by Martin Ward after George Butterworth, lovely choreography and endearing Edwardian-dressed furry creatures. And even though the show is not directly related to Christmas, it's full of festive cheer, with carollers carrying oil lanterns, Badger's warm fire and even snow falling over the audience.

The show deserves a larger audience than the Linbury Studio Theatre can hold, but the intimacy of the venue works perfectly with the darkened burrows and small but extremely talented cast onstage. This is a really heart-warming work and another highly recommended Christmas treat.

Wind in the Willows is at the Linbury Studio Theatre until 5 January. Tickets priced £11-24 are available from the ROH website. Pictured: Cris Penfold as Toad / Photo by Johan Persson.