If you haven’t already, you can subscribe to these listings and get them delivered to your inbox at 7am every morning. Here’s how. And if you like what you see, please spread the good word.

GIVE BLOOD: Your last chance to donate blood, before rivers of the stuff flow through the city. Head along to Stoll in Fulham or the Ecology Pavilion in Mile End. Free, just turn up, see website for times

PROTEST SONG: Remember that highly offensive song by the Amateur Transplants about the London Underground? A group of disgruntleheads will be singing it outside London Underground HQ at 55 Broadway today, in protest at the forthcoming Tube drivers' strike. To avoid arrest, the lyrics have been changed to incorporate ducks and punts...still not sure about the 'rifle' line though. Free, just turn up, 12.30pm

HARK: Is that the sound of Gabriel's trumpet? 4pm

PARTY: Plenty of venues are holding end-of-the-world parties. We could list them all out again, or you could take a look at the doom-defying listings that Time Out London put together. That's right, we have no reservations about recommending a competitor. We'll all be burning together in a few hours.

COMEDY: The last time Sam Simmons was at the Soho Theatre we were slightly terrified and definitely amused. He’s back with a new show running until 5 January. From £12.50, prebook, 9pm

PERISH?: Asteroid impact? Nuclear holocaust? Large Hadron Collider goes awry? Unleashed Balrog? We don't yet know which form Gozer the Gozerian will choose, but prepare thyself for a strong bout of doom. Headphones on, and crank up that Godspeed You! Black Emperor album to 11. 10pm

UNSUBSCRIBE: So, the end of the world never happened. Londonist lied to you through the medium of lies. We can only suggest you unsubscribe to these emails right away and follow a less credulous publication. Midnight

London Weather
Today's climactic conditions have been well covered by japesters on the Internet already. So here, for those who haven't already seen it, is the forecast: 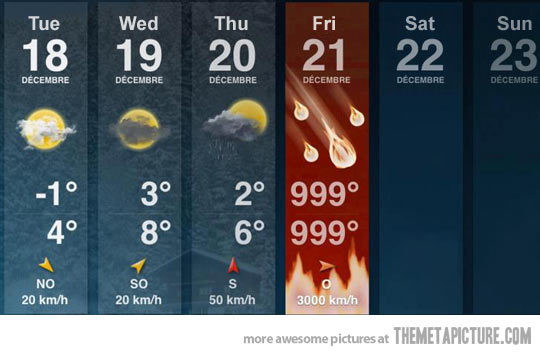 Secret Hidden Bit At The Bottom
Just remember, the Mayans would have been six hours behind us. We can't breathe easy until 6am on 22 December.

Things to do in London Today will return in the New Epoch. (Probably 3 January, depending how much holiday your doom-drained editor decides to take.) Merry Christmas everyone!