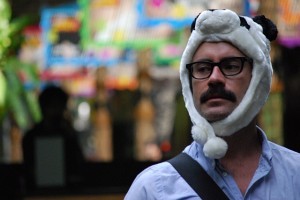 Meanwhile, there's a balding, mustachioed Australian dressed in t-shirt and pants in front of you. He's thrusting a packet of mild cheese and broccoli pasta in an audience member's face. You may find yourself wondering what's happening.

Meanwhile is Sam Simmons's latest show from Edinburgh. It is made of daft skits about pine cones and Old El Paso Taco kits, questions from fans and Sam's answers, and brief interludes for quickfire gags about what's happening elsewhere ("meanwhile...") around the world.

Meanwhile, back at the Soho Theatre, Simmons is experiencing a scripted breakdown about his failure to win over the audience. This is a comedic device; the audience are, if not exactly constantly guffawing, certainly intrigued and enthralled by the frenetic activity on stage and living in slight terror of just what this insane guy is going to do next.

Meanwhile, you discover the answer is: explain why ducks are evil, play bread tennis and brilliantly mash up Christmas and Star Wars.

Meanwhile, Londonist is trying to remember the last time they saw a comedy show without a flipchart, but that's a discussion for another time.

Meanwhile, you can see Sam Simmons at the Soho Theatre, Dean Street, from 20th December until 7th January with short breaks for Christmas and New Year, start 7.45pm. Tickets cost £15 / £12.50.