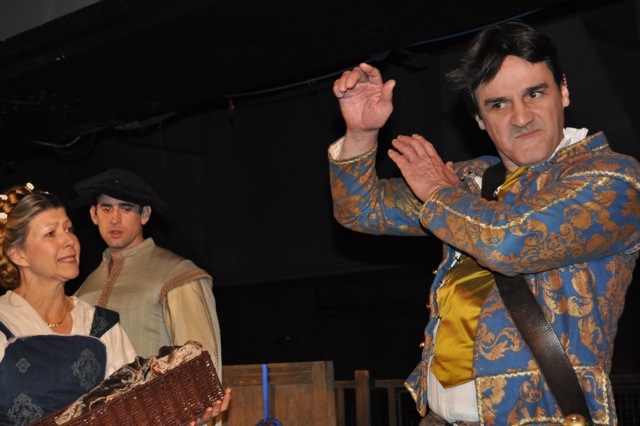 A sizeable cast assembles at the Rose Theatre to present Shakespeare’s turbulent tale of love, tragedy and, ultimately, of reconciliation. We follow the trials and tribulations of the Sicilian and Bohemian kingdoms, as the jealous and irrational actions of King Leontes of Sicilia bring ruin on his family and threaten to leave his kingdom without an heir.

Generally considered as a comedy, this tale does not lack for tragedy and turbulence. It is also home to one of Shakespeare’s most famous stage directions: "Exit, pursued by bear". In this case, the bear adds more comedy than terror.

The acting is solid throughout, particularly Hermione (Francesca De Sica) and Jonathan Pembroke as King Leontes. We also like the untrustworthy, opportunistic, guitar-playing beggar, Karl Nicklas, whose flirtatious manner gets a number of giggles from the audience. This production uses full Elizabethan costume which is a nice touch.

Director, Helen Oakleigh, makes good use of the venue, a wooden stage stretched across the archaeological site of this Tudor-era theatre. The small band of musicians, playing on the far side of the theatre, are a lovely touch: they add to the atmosphere and carry this play along at key moments.

The Rose Theatre is worth a visit in itself and has a wonderful community like feel which is so rare on Bankside. If you have time at the end, take a moment to peruse the information boards at the back of the theatre which give a real sense of the historical importance of this building. As in Shakespeare’s times, there is no central heating: we recommend wrapping up warmly.