The Mermaid Of Hampstead Heath 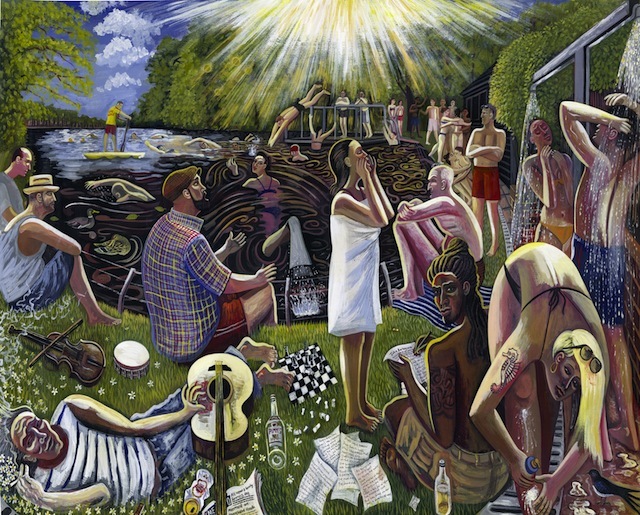 Burton Bradstock (the musician, not the village) launched his new album of old English folk songs revisited and reimagined through jazz this week at a lovely gig in the Dean Street Pizza Express.

The Mermaid of Hampstead Heath, written by Pete Berryman, is the one original song on the album, describing a fleeting and surreal romantic encounter on the Heath. The song's lyrics not only give the album its name — All Upon A Lovely Summer's Day — but also inspired the album cover artwork by London artist Ed Gray. We think it's gorgeous. Ed says:

The left side of the painting features members of Burton Bradstock's band and Burton himself calling to the mermaid who is floating away from him. Images from the song fill the painting- the chessboard with its lost match- the victorious Queen dominating the King, the seahorse tattoo.

The right side of the painting features people that I've observed and sketched whilst I've been going to the mixed pond to swim and to think and to get away from the busy streets of London. These include the lifeguard with the red shorts and the wild-eyed rasta who was surrounded with notebooks and jottings when I first saw him. He was also espousing the benefits of urophagia. In the painting I've given him the task of transcribing the lyrics to the 19thc songs from Burton's album.

Listen to the song here and it will all make sense.