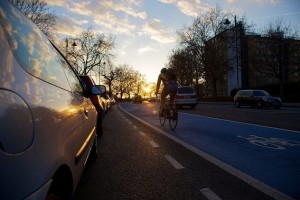 A London Assembly transport committee report has called upon TfL and London mayor Boris Johnson to reduce the number of cycling casualties in London.

The mayor's much-vaunted 'cycling revolution' has been looking decidedly shaky — cycling groups say it's failing and the tragic death of a cyclist in Barking this week after a collision with a lorry raises further questions about road safety. The same week also saw the anniversary of the death of Svitlana Tereschenko at the Bow roundabout.

The report, Gearing Up: An Investigation into Safer Cycling in London, highlights an increase in injuries since 2006 and criticises the mayor's plan to increase cycling to 5% by 2026. In fact, their proposal is more ambitious — 10% by 2026. According to the report, TfL's spending on cycling is about £10 per capita, half of what's spent in those cycling meccas of the Netherlands and Copenhagen. But it's not all about the money, it's about cycle training and raising HGV safety standards too. The mayor's office told the BBC that details of a 'major new investment in cycling' would be outlined later this year.

Cyclists in central London may have come across lorries with recorded messages alerting them to an impending left turn while TfL have made improvements at the Bow roundabout. Not everyone thinks they're working though — this post by Diamond Geezer says it's over-complicated and cyclists were still jumping red lights and using the flyover instead. Cycling blogger Cycalogical also calls the results of the Bow improvements 'a confusing Blackpool-illumination-like forest of similar-looking lights'.

The Cycle Superhighway is also under threat in some areas — earlier this year, the Elephant & Castle section was proposed for use as an HGV delivery route. The Freight Transport Association (FTA) responded to the report, saying that it reinforces the need for all road users to share roads safely.

Photo by Ben Kelly in the Londonist Flickr pool.