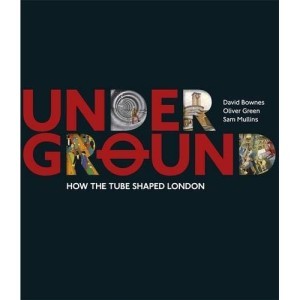 New histories of the Underground come along with a frequency that almost needs its own signalling system. What do authors David Bownes, Oliver Green and Sam Mullins bring to the table that hasn't been written a dozen times before? Quite a bit, as it happens. Underground — How The Tube Shaped London is certainly the finest pictorial history of the Tube we've yet seen, and is set to be the last word on the subject for, ooo, at least a couple of years.

There's certainly a timely news hook imminent, with the Underground's big 1-5-0, in January 2013. Bownes and Green are well placed to look back on that history, as former head curators of London Transport Museum, while Mullins is the current Director. All contribute individual chapters to the book, yet maintain a consistent tone throughout.

The first half provides an excellent if already well-trodden introduction to the Tube's first 100 years. Others, such as Christian Wolmar, have perhaps gone deeper, but the present authors' accumulated experience helps them select some tasty anecdotes to liven up the familiar story. The later chapters tackle the post-WWII Tube, discussing the infighting, politics and mismanagement that characterised the network between 1960 and 1990 (and the later PPP omnishambles) with surprising candour.

The illustrations do a lot of the talking — whether its the evocative and rarely seen photographs of the Underground's earliest days, or shots from the 1980s showing just how rotten the system had become through underfunding. The litter-strewn, graffitied tunnels of 25 years ago look like they're from an entirely different city to the relatively clean system we know today. The book ends on an optimistic note. With the completion of the Overground project, the promise of Crossrail, and the ongoing upgrade to every line's infrastructure, the system is in as good a shape as at any point in its history. Not that we grumbling passengers would ever concede as much.

Underground — How The Tube Shaped London, by David Bownes, Oliver Green and Sam Mullins is out now from Allen Lane. Buy here.