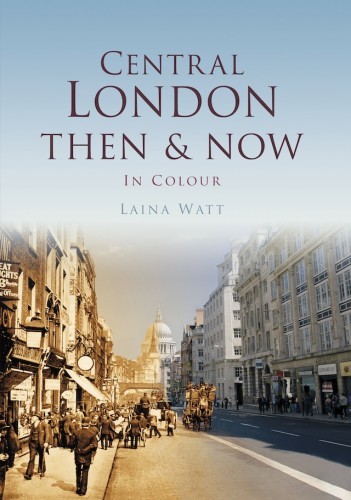 The History Press has embarked on a mission of photographic time travel, releasing a series of books comparing old images of Britain to modern-day retakings. The publisher's website lists over 70 of these volumes, covering areas as low-key as Thatcham and Basildon.

The latest stablemate has somewhat grander vistas. Central London Then & Now presents dozens of images from late Victorian and Edwardian London, a period of imperial splendour and big architecture. These are presented side by side with recent photographs from similar spots, ably taken by Laina Watt.

The result is a well-presented, and competently written tour of what was then the most important city in the world. Many of the sepia images are haunting, such as the illuminated Embankment of the 1860s, lined with sapling trees, and a similarly magical modern-day take on a summer's dawn, the moon hanging low over Parliament and the now-mature plane trees masking the buildings.

The choice of subjects will be a little obvious for some tastes. Virtually every photo shows an A-list tourist attraction — Abbey, Palace, Nelson. Consequently, this is a local history book for the newcomer to London rather than the hardened urban explorer. Those wishing to explore more widely should check out the excellent old-and-new comparisons of 'Roll The Dice' on Flickr, which offer both breadth and depth.

If you like this sort of thing, History Press also offer titles covering Ealing, East End, Harrow and Tottenham & Wood Green, in the London area.

Central London Then & Now by Laina Watt is out now from The History Press.