Where To Watch The US Elections 2012 In London 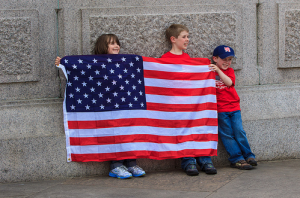 If you're thinking of staying up all night on Tuesday 6 November to find out who America elects, you don't have to do it home alone.

The Redhook Red Eye Election Night Party at Redhook in Clerkenwell starts at 8pm and live coverage goes through till dawn. Tickets are £65 but that includes all food and (booze) drink through the night and breakfast-to-go if you make it to the end. You can do the Popbitch political picture quiz when the news gets dull.

The Frontline Club party will be watching it all on various channels from 8pm. Tickets are £12.50, which includes wine and beer, but they'd like you to book a table for an themed menu dinner in their restaurant between 6-9pm too.

Join Obama supporters at the only American-organised election night party that starts at 9pm and lasts till 6am. Nine live big screens will be showing American news channels Fox and CNN all night long. Tickets are £32 and include a buffet, champagne voucher, election guide and special souvenirs. There's a press photocall at 11:30 pm for a special surprise, in the Famous Three Kings in Fulham.

It's free entry to the American Bar at the Stafford Hotel from 9pm where there's live coverage and an "election night veteran bar team" prepared to meet your anxious alcohol needs. Just keep an eye on your bar tab if you're staying till dawn.

US Election Giggle 2012 at Bethnal Green Working Men's Club is spicing up coverage with political comedy and fun punditry, promising "the best (and hopefully last) Mitt Romney jokes you'll hear all year" from 9pm until it's over, tickets £10.

Join Democrats Abroad at the Marylebone Sports Bar and Grill from 10.30pm. Tickets are £10 and can only be paid for by American citizens but there's no such restrictions once you're into the party. SOLD OUT (see comments)

We haven't yet got wind of a Republicans Abroad equivalent.

The Lexington pub on Pentonville Road's pulling down the big screen and squishing up the sofas (get there early to bag one) to watch the results roll in from 11pm with hotdogs, twinkies and other American fare on sale and free entry to the event.

Photo by Paul Parkinson via the Londonist Flickrpool.