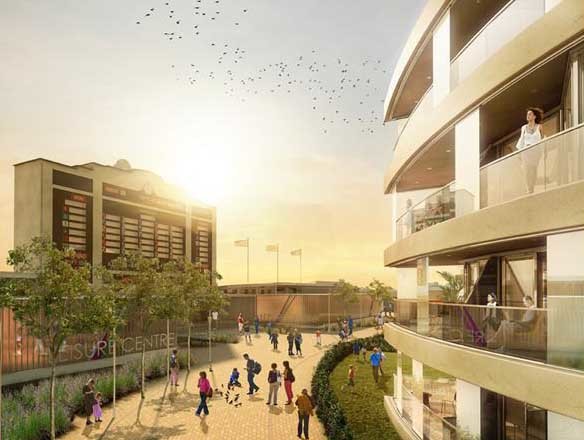 Seems that the Stow has gone to the dogs after all: Following a rancorous four-year battle, the plans to redevelop Walthamstow Stadium into a £50m, 294-home residential development and leisure centre has been approved following the intervention of Boris Johnson.

When the famous greyhound racing track closed its doors in 2008, the site was purchased by London & Quadrant (L&Q) who came up with a proposal that, while keeping the listed Art Deco façade, left very little else behind. A local bunfight ensued, with politicians including Iain Duncan Smith (MP for Chingford and Woodford Green) and Stella Creasy (his counterpart for  Walthamstow) weighing in against the development, arguing that L&Q were set to make a loss on the scheme and were reneging on their their Section 106 community funding. Things got even more heated when L&Q made accusations of "thuggish" behaviour at consultation meetings. Meanwhile, a greyhound owner by the name of Bob Morton dreamed up a new plan which would retain the dog track.

Eventually, L&Q's plan was approved by Waltham Forest council earlier this year, leaving the final decision in the sole purview of City Hall. And the mayoral thumb is jutting upwards; while noting "the sadness of many about the demise of dog racing from this historic corner of London", Mr Johnson argues that the development will give the wider area a "major boost".

For his part, IDS is furious at his fellow Tory, and the battle might not yet be over: Save Our Stow is urging people to write to Eric Pickles, in the hope that, as Secretary of State for Communities and Local Government, will overturn the mayor's decision.

Top 10 things to do in Waltham Forest