Walthamstow Stadium: Not Going To The Dogs After All

By Dean Nicholas Last edited 136 months ago
Dean Nicholas Walthamstow Stadium: Not Going To The Dogs After All 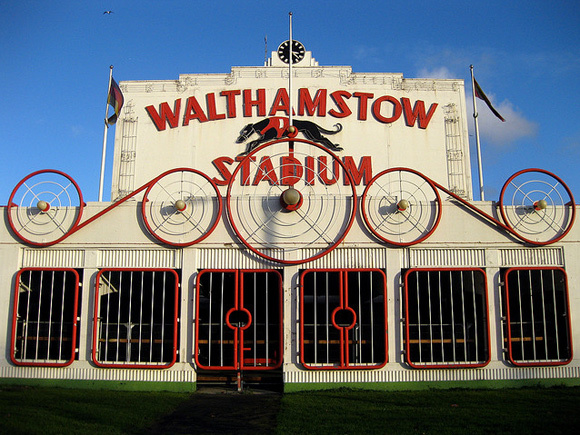 Since the traps were shuttered for the last time in 2008, a lot of sound and fury has been made about the future of Walthamstow Stadium, but precious little has actually happened. However, following a long, acrimonious battle, there's a chance that the famous dog track might yet be saved.

After its closure, developer London & Quadrant (L&Q), who had bought the site for £18 million, drafted up a 480-home masterplan that retained the Art Deco entrance and precious little besides. In response, local businessman and greyhound owner Bob Morton crafted an alternative plan, which would involve retaining the dog track, and offered L&Q a certain sum of money for the site (Morton says around £8 million, but L&Q claim it was half of that).

L&Q dismissed Morton's offer as "not financially viable" and, after waiting a year for the economy to recover, charged Conran & Partners with drawing up a new scheme, which involved 300 homes, public spaces, cycle lanes, but, again, no dog track. Yet opposition to the plan was growing, with grassroots campaigners Save Our Stow, local MPs, the residents of Waltham Forest, and even Boris Johnson questioning the need to destroy most of the stadium and rid Walthamstow of greyhound racing for good. As the rancour on both sides increased, things took a bizarre turn in December of last year, when L&Q pulled out of a consultation meeting, citing allegations of threats and aggressive behaviour toward their staff members, and implicating Iain Duncan Smith and Stella Creasy, MPs for Chingford and Walthamstow respectively; such was the risible nature of this claim that they were forced to pump out a press release apologising to the politicians for contravening the Defamation Act 1996.

In the past week, English Heritage weighed in with their verdict: the L&Q plan would "harm the settings of the retained listed assets" on the site, and as such, they urged Waltham Forest council to refuse planning permission. Days later, details of Morton's latest, revised proposal were released. Drawn up by Spacelab, it retains most of the stadium, the listed facade, and the kennels, and knocks down one stand to make 140 residential units.

So what happens next? The decision by English Heritage does appear to swing the balance firmly in favour of the dog track brigade, and L&Q may now cut their losses and sell up. Alternatively, having come this far, they may dig their paws into the dirt and cling on, in the face of public opinion, political representatives, and the Mayor of London himself, though in the end it's probably Boris who'll make the final call.

Another, perhaps ideal, solution — in which L&Q recognise the wishes of most of the local population and incorporate a dog track into their plans — seems unlikely, given the bitterness that has already coloured this battle.