Cravings for London’s street food seem to be insatiable and, much like the waistbands of its patrons, future expansion is guaranteed. Last week, the popular Eat.St market in King's Cross re-launched as KERB. It becomes just one of the 17 London markets listed on Streetfood.org.uk devoted entirely to street food.

It would be tempting to think that this foodie phenomenon is a new fad, but its roots can be traced back to Roman times.

Most of the population of Londinium did not have access to a kitchen. Street vendors quite literally fuelled London’s growing society, and their food became the primary source of fuel for lower class citizens. Unfortunately, evidence of the variety of food on offer is scant. Yet Roman excavations within the Square Mile nearly always include oyster shells — a ubiquitous food eaten by the lowest classes at a time when the shellfish was more commonly found in British waters.

Aptly, the site considered the centre of Roman London is now Leadenhall Market, formerly a 14th Century meat bazaar and still today a source of food for hungry City types.

The vendors of London’s distant past would have created rather less appetising spoils than the bourgeois offerings of today. But it was their bartering techniques that naive customers might fear the most. In the 15th Century poem ‘London Lickpenny’, an unsuspecting Kentish man describes the incessant sales patter of London's vendors.

"Hot pescods!" one gan cry, "Strabery rype, and chery in the ryse!"..."Then come there one, and cried "Hot shepes fete!", "Risshes faire and grene," an othar began to grete.

Oysters were still "cried in all parts of the streets". Hot coldlings (baked apples) and hot pies were also popular. 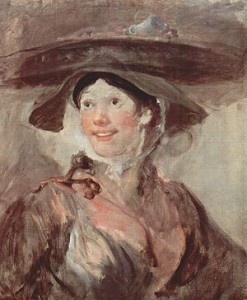 According to Liza Picard's Restoration London, many street sellers of this era carried their wares on their heads, leaving the food horribly exposed to birds and ejected liquids from above. With all this filth around, cherries were a welcome sweetener, and were  sold on sticks to the cry of "Cherries ripe-ripe-ripe!". Cakes and pastries were also everywhere, and the ditty about the Muffin Man (he lives on Drury Lane) was first recorded in the late Georgian period. Picture cards of the day show vendors selling pickled Newcastle salmon from a head-mounted basket, the nut woman with her sturdy barrow, and a Turk trading rhubarb.

Street hawkers paid no rates or taxes and would move around town, often visiting the customer's house. Their lives made interesting subject matter for contemporary artists and writers. Indeed, ‘The Shrimp Girl’ (pictured, again, with her wares balanced on her head) remains one of William Hogarth’s most famous works.

During Victorian times, London’s population boomed at an unprecedented rate. In 1801, the populace stood at just under 865,000 people, by 1871 it was over 3 million. The new London crowds were predominately industrial workers, and they needed to be fed. Just like the Romans, they had little access to cooking equipment, and so the demand for London street food grew rapidly. The Dictionary of Victorian London estimates there were over 6,000 vendors working in the city, serving up a veritable feast of pea soup, hot eels, pickled whelks and fried fish, alongside more familiar offerings like pies.

Street food in the early part of the century carried on much as in Victorian times, with warm, hearty British fare dominating the selection. Cigarette cards show still-familiar vendors such as the baked chestnut seller ("all 'ot"), the ice cream vendor ("who will have a cooler?"), and the sandwich man.

As London rebuilt itself after the destruction of two World Wars, a new surge in population arrived as a result of immigration. London became more multi-cultural, and its culinary tastes began to reflect this. Suddenly the fish and chip vans stood side by side with vendors offering sweetly spiced West Indian, African, Indian and Asian cuisine. Britons themselves became better travelled, thanks to more affordable international air fares. People got more adventurous with their food.

To the present day

Whether walking around in togas or designer suits, London’s population tends to be in a rush. We have historically worked long hours, sometimes for very little pay, so street food — cheaper than a proper 'sit down meal' — has long been a necessity for many. Luxuries like the humble microwave and electric oven are still very modern additions to kitchens. Less than a century ago many didn't even have a kitchen, let alone the gadgetry.

The modern growth of street food also reflects a sense that contemporary Londoners are simply tired of the ‘haute cuisine’ of the 1980s and 1990s. Paying a lot for very little is so passé, a dinosaur of the guiltless consumption characterised by the late 20th Century. There is little doubt that the burger and kebab vans of the 1970s onwards did much to line and refill the stomachs of British clubbers during this era. Indeed, Britain has taken to the street food trend so much that it even has its own Oscars, The Street Food Awards, and has proved itself to be more than lucrative, with estimated earnings for the most successful vendors at around £1,000 a day.

The recent popularisation of street markets and their traders has been described as a ‘revolution’ in eating. In reality, the preparation, purchase and consumption of food street-side has been a consistent feature in London for thousands of years. It is rather the types of food served that reflect the state of modern day London, a demographic with both varied and refined tastes. You can probably still find a sheep’s foot for sale. But move along one van and you'll be offered an organic quinoa gluten free vegan patty with samphire pickle.