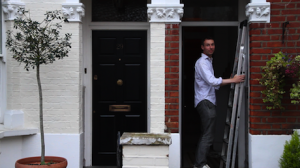 Think it’s impossible to belong to a local community when you live in London? Well think again. Connecting in your neighbourhood is what Streetbank’s all about.

Every day, eight million Londoners get on with getting on. As exciting as big cities are, their very size can leave people feeling disconnected from the neighbours immediately on their doorstep. However, while some may think that ‘local’ and ‘community’ are phenomena reserved only for our more rural cousins, Streetbank is proving quite the opposite.

It's a website that gives neighbours the opportunity to lend, give away or offer items and skills to anyone living within one mile of their home. People simply sign up with their postcode, add at least one item or skill they would like to share, and they can see everything offered by their Streetbank neighbours. All for free.

Streetbank works like a giant garden shed, tool-kit, fancy dress chest, skills bank, DVD collection and library all rolled into one. With 5,000 plus members in London and over 17,000 across the UK, the organisation is living proof that community spirit is alive and well.

People can make use of it however they wish. Some want to save money, for others it’s about living more sustainably and for others still it’s about getting to know their neighbours. In a world where the annual average usage for a household drill is 14 minutes, it makes sense to share more on a purely practical level, if nothing else.

Kierra from Battersea was unable to afford Spanish lessons before her trip to Argentina and resigned herself to making do with her old school text books and an online course. Then she heard about Streetbank. Now she meets up regularly with her neighbour, Alejandra, and what began as free Spanish lessons has resulted in a friendship that has so far seen the women trying out local restaurants, checking out the recent London Spanish Film Festival and even taking a road trip to Brighton.

Fulham-based Kerryn Johnson is clear about the positive impact Streetbank has had in her neighbourhood:

I use Streetbank extensively. I was looking for some lego for my four-year old and did a call out to my area. A neighbour I didn’t know got in touch and ended up giving me three huge bucketfuls! We had so much we ended up passing on half of it to my son’s school. I love that – spreading things around your community to where it’s going to be best used.

Streetbank, although practical, fun and economical is, at heart, about reconnecting community, alleviating loneliness and making society a little less independent. Time to check out who’s in your Streetbank neighbourhood and get sharing today: www.streetbank.com

The Story of Streetbank from Julian Parmiter on Vimeo.