Plans To Turn Catford Bridge Tavern Into A Supermarket 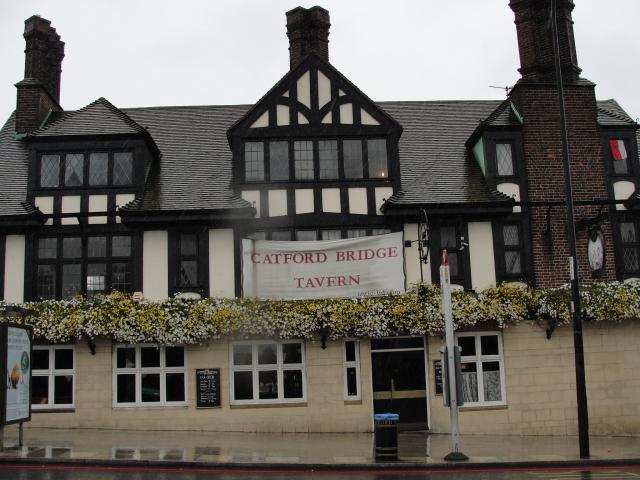 South East London is in a bit of a state after it transpired the Catford Bridge Tavern is likely to be turned into a small supermarket.

The pub, which used to be the notorious Copperfield but was recently taken over, refurbished and re-opened by the Antic chain, is the subject of a planning application to Lewisham Council. This application, by the building's owners, is for turning the currently little used upper floors into flats – but the killer line comes in the notes (PDF):

It was disclosed that the lower level of the existing public house was currently undergoing a transaction that the public house would be subject to a change of use to planning class A1 which would be taken up by a national retailer.

Catford and Lewisham are awash with high street versions of large supermarket chains (your correspondent could get up from this desk and walk to four of them within 10 minutes) but only recently have some of the, previously a bit scary, local pubs started to become places that are welcoming to everyone. Local MP Heidi Alexander told us

The Catford Bridge Tavern is one of the best things to have happened to Catford in the last few years and I am adamant that it must stay. Catford has been crying out for a decent pub for years. We have just got one in the shape of the Catford Bridge Tavern and it would be a huge blow to the area if it was forced to close. I'd encourage anyone who wants to keep this pub in Catford to write to the Planning Department at Lewisham Council and to make their views known.

Antic weren't even aware of the plan until last week and have started a campaign to save the pub, with advice on how to object, and Brockley Central has suggested possible grounds. These are worth reading because the developer is being rather cunning; the change to the pub itself isn't covered by this planning application so by getting the flats in first, the pub won't survive when people are living above it and hey presto, there'll be an empty unit for a supermarket chain to walk into.

What's happening in SE6 is just one of several similar incidents around London. Another Antic pub, The Old Fire Station in Hammersmith, was turfed out of its home last month after the building was sold at auction. The former George IV in Brixton is becoming a Tesco Express. The Wenlock Arms was only saved from development after Hackney Council made it a listed building. The property market means there's more money to be made from residential and retail than a nice pub.

Where boozers are leased there's always the chance they could be shut down, no matter how successful, popular or community focused. Antic were aware of the risks when they took on the Hammersmith and Catford leases, but what kind of message does this send to responsible companies looking to turn around failing pubs? The Old Fire Station used to be The Redback before it was shut down after complaints [edit: see comments], and The Copperfield was about to lose its licence in a similar situation until Antic stepped in, encouraged by Lewisham council and police.

Last week's News Shopper published an article detailing how many of Lewisham borough's pubs have closed in the last 10 years, many of them failing pubs that are now flats (in an ironic twist, the Catford Bridge Tavern was named by a councillor as a success story). And bizarrely, Greenwich Council recently rejected Antic's application to turn an empty Woolwich centre building into a new pub. Faced with this trend, why would anyone bother with regeneration?