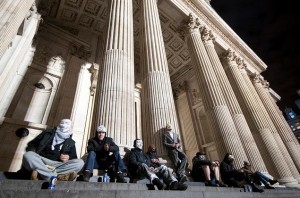 Protesters marked one year since Occupy London pitched up on the steps of St Paul's by chaining themselves to the pulpit during a service yesterday.

Four women read a 'prayer', which included the lines

Your collusion with the City of London Corporation led to our violent eviction on your doorstep.
You testified against us which acted to uphold injustice and inequality that is growing by the day.

Cathedral staff said they were happy for the quartet to remain, but when City of London police turned up and warned the protesters they could be arrested, they cut themselves free.

Quite what this was meant to achieve, other than keeping Occupy in the media, is a bit lost on us. St Paul's was never the intended target of the protesters (it was, in fact, the London Stock Exchange, but as it's built on private land the owners were able to keep the tents out). The church did get itself into a real mess about how to deal with the camp but we wonder how focusing ire on their perceived lack of help in the battle against cuts is supposed to help the 99%.