The Monsters of London: A Halloween Guide

By Londonist Last edited 116 months ago
Londonist The Monsters of London: A Halloween Guide 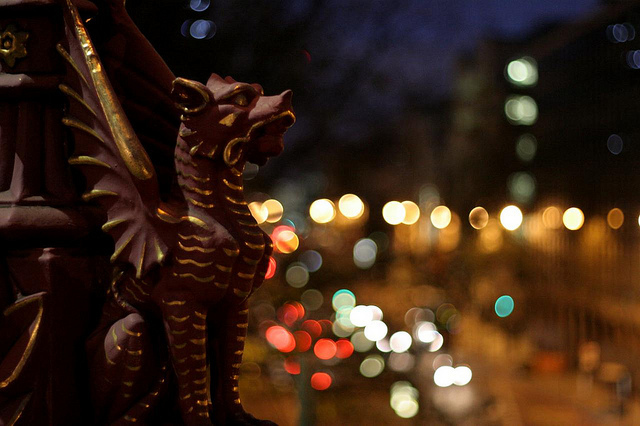 London houses some good monsters. Regular readers might remember the Tiger of Edgware, or even the Sydenham Panther — but large tabbies are just so...pedestrian, don't you think? Surely with such a long and storied history, London can do better than that.

This is just a selection of the horrors lurking in dark corners, or in plain sight. We can't swear that they're real but, crucially, we can't swear they aren't.

The two original cast-iron boundary dragons used to live in the former Coal Exchange near Old Billingsgate market — but when that was demolished in 1963, they were moved to Embankment to mark the edge of the City of London.

There are 10 of them now, some more imposing than others, and a Google Maps guide reveals their locations — outlining the modern City of London, which hasn't changed all that much in hundreds of years.

There's nothing mystical about them: the boundary dragons are just a representation of London's coat of arms. Over in Holborn, though, it gets a little more interesting. Yes, as Tom Spender shows us, there are some pissed-off dragons overlooking the River Fleet from Holborn Viaduct.

Legends from the Dark Ages speak of dragons in the skies above the city. We don't know what these dragons might really have been. We suspect weather conditions might have simply gone a bit weird at the time — 6th-Century meteorologists have a worse record than Michael Fish.

Glance upward while in the vicinity of St Peter's Chuch on Cornhill and you'll notice you're being stared down by the three "devils of Cornhill".

The infernal adornments are partly obscured by modern buildings, but at the right time of day, they become particularly malevolent shadows against the sky. The possibly apocryphal story of the Cornhill Devils goes like this. A vicar found that a proposed building would encroach upon St Peter's Church by a whole foot. He forced the architect, at great cost, to redraw the plans for the development. As a retort, the architect added the grotesque statues. The story has everything: religion, architecture, and petty vengeance.

The lesson to take away is: never annoy an architect. Supposedly, one of those hideous devils is modelled on the vicar's face.

If you go looking for the dragons of Holborn Viaduct, take a detour into in Farringdon. There are reports of a hulking, ghostly figure in Bear Alley.

That's right: not far from Fleet Street you might find the lost and very annoyed spirit of a bear.

And if, for some reason, that's not enough hungry ghost bears for you, know that it isn't alone. Long before Made in Chelsea, up until the Cruelty to Animals Act of 1835 and quite possibly for some time after that, many Londoners amused themselves of an evening with a spot of bear baiting. Bankside, in particular, was a hotspot. The sport is still marked by Bear Alley, where this blood sport would be enjoyed by the likes of everyone from peasants to Henry VIII.

Serpents on the Embankment

One of the few attractions of the traffic-heavy Embankment is the row of 55 Victorian streelamps. In fact, the Victoria Embankment was the first street in Britain to be permanently lit by electricity, back in 1878.

A variety of creatures curl around those lamps, including the so-called "Embankment Dolphins", at which even the most anatomically challenged observer will raise an eyebrow. They look nothing like dolphins. Not even close. According to legend, those strange fish are recreations of the serpents reportedly dragged out of the Thames as recently as 1900, when the city was cloaked in fog and scaley nightmares roamed the waterways.

Look out, too, for the Sphinx arm rests on the benches near Cleopatra's Needle.

Something Hungry at the Olympic Park

Unusual aquatic beasts might not be a thing of the past, or of myth. Fairly recently, as in "last year" recently, construction workers in the Olympic Park spotted something dragging a Canada goose into the nearby river for its dinner.

A Canada goose is quite large, as birds go. They can grow up to 16 lbs — about the size of a large baby. But don't worry. It was probably just a runaway alligator, or maybe a giant turtle with a taste for flesh.

Whatever it was, further investigations discovered mysterious holes in the Olympic Park, apparently dug by some kind of animal. Our beast has a lair. It might even be full of gold.

Londonist wishes you a happy Halloween, and happy hunting! Remember: conventional wisdom applies. If you should come into contact with any of these creatures, don't let them bite or scratch you, and aim for the head.

At the very least, send us some good photographs.