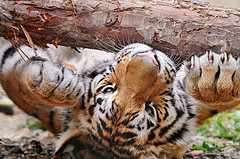 Edgware, situated in north-west London, is not 'big cat' capital. It never has been.

We've all seen news clips on television and read newspaper articles of police hunts for alleged monstrous felids on the moors, in back gardens and local woods. The summer of 1988 was no different as many police, accompanied by tracker dogs, and even a helicopter, searched Edgware in pursuit of... a tiger!

Of course, the beast never showed up. Why? Simply because a predator the size of a tiger or lion could not exist in the UK wilds, but smaller cats such as the puma and lynx most certainly could. And do. However, the tiger of Edgware story broke when resident David Corbel awoke one morning, peered from his kitchen window, and to his horror, saw a giant 8-ft long cat perched on the branches of a tree in a neighbour's garden.

"I thought I was still dreaming, so I called my wife", David commented at the time.

"She confirmed what I was seeing - it had a black body, ginger hind quarters and white paws."

There is no large cat species which has these characteristics, although the melanistic leopard has a dark, seemingly black coat that could appear gingery in sunlight, but they do not have white paws, unless it had been standing in chalk maybe, or walked through paint!

It was reported that large paw-prints said to belong to the elusive animal were found in an area where a tree had been deeply scored, a marking sign of a large cat. However, despite the search, no trace of the animal was to be found.

Some theorised that the cat had escaped from a circus that had been visiting the area, but like so many beastly cat stories, the animal eluded all, and faded into the realms of folklore. The panic echoed stories from the previous decade when police were called out to hunt the Shooter's Hill beast. Again, no sign... but it's nice that such mysteries can sometimes prowl into our back gardens.