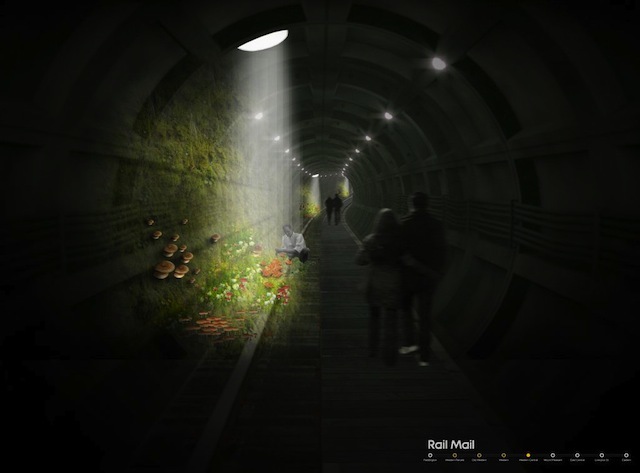 "Pop Down" would reuse the old Mail Rail tunnels, 9 foot-wide tubes for the transport of mail, which run just north of Oxford Street and were mothballed a decade ago. The underground garden would be lit via fibre optic ducts up to the surface, where sculptural glass mushrooms would harvest light, allowing real fungi to grow down below. The concept of an underground park fed by surface light isn't a new one, and resembles a slimdown version of New York's proposed Low Line.

Although the scheme beat 170 rivals (including the runner up idea of a linear lido along the Regent's Canal), it has no known political or financial backing and remains a literal pipe dream. That said, the idea of a long tube filled with mushrooms suggests an obvious sponsor.

The shortlisted designs remain on show at Lambeth's Garden Museum until 21 October. Entries can also be viewed online.

See also: Our own ideas for building a High Line in London.