London's Volunteers: What Next? 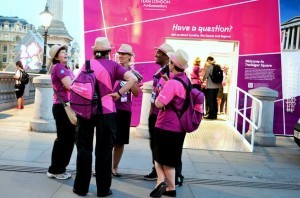 The fantastic army of volunteers produced during the Olympics, the LOCOG Gamesmakers and Mayor's London Ambassadors, have been widely mentioned as one of the best potential legacies of the Games. So we were interested in a meeting that happened yesterday at City Hall when Veronica Wadley, the new Senior Advisor for Team London, Volunteering, Charities and Sponsorship, answered questions on just that.

She's definitely keen on deploying Team London members during large sporting events and at tourist hotspots (when? All the time? Don't know). But we didn't find much out else, to be honest. Wadley's responses tended to be very curt (when Darren Johnson asked her to elaborate on contact she'd had with voluntary organisations during her career, she replied with "I have answered your question", a phrase that got several outings). In fact, her closed way of answering questions united John Biggs and Tony Arbour in cross-party frustration.

Perhaps the main issue facing the pink and purple clad army is whether to channel them into local volunteering or keep them for London-wide promotion. Wadley agreed that boroughs should be able to access LOCOG information about Gamesmakers. But she also agreed with Andrew Boff when he read out a letter from a London Ambassador, saying that many of them already volunteer locally but leapt at the chance to do something for the entire city. If you were one of this summer's volunteers, let us know your feelings in the comments.

On a different note, if the name Veronica Wadley rings a bell it's because she's the former editor of the Evening Standard – you know, the one who presided over the paper during the period it later felt the need to apologise for. She was also the centre of controversy when Boris intervened to appoint her to Arts Council London, a post she still holds. The Labour Assembly Members clearly haven't forgiven her for the Standard's many attacks on Ken Livingstone, starting the meeting questioning whether the articles about Ken's cronyism aren't now incredibly hypocritical given her most recent professional appointments relied on Boris. She'd better get something concrete out soon or they'll be ruthless.

You can watch the session of the GLA Oversight Committee yourself on the GLA website.

Photo by pallab seth from the Londonist Flickr pool